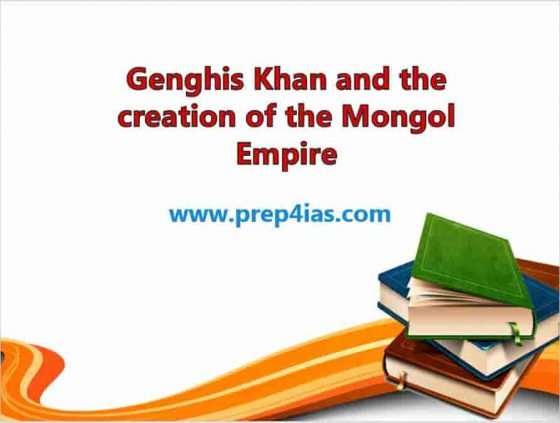 Genghis Khan, the leader of the Mongols (1162-1227), grew up with a humble beginning and built the biggest land empire in history. He unified the nomadic tribes of the Mongolian plateau before capturing major portions of China and central Asia. His descendants continued to grow the empire, conquering distant lands. Between 11 and 12 million contiguous square miles, or an area about the size of Africa, were under the Mongols authority at their height.

Genghis Khan and the creation of the Mongol Empire

Although Genghis Khan’s invasions resulted in the deaths of many people, he also gave his subjects the right to practice their religion freely, outlawed torture, promoted trade, and established the first global mail service. During a military battle against the Chinese state of Xi Xia, Genghis Khan perished in 1227.

Temujin, who would later become Genghis Khan, was born in or about 1162 not far from where modern Mongolia and Siberia met. According to legend, he was born with a blood clot in his right hand. His father had abducted his mother and forced her into matrimony. Life for the Temujin was severe and unstable at that period, as dozens of nomadic tribes on the central Asian steppe were continuously warring and plundering from one another. His father was poisoned to death by a rival clan before he turned 10. Then, Temujin’s own clan abandoned him, his mother, and his six siblings so they wouldn’t have to provide for them.

Soon after, Temujin killed his older half-brother and assumed control of the impoverished family. He was briefly abducted and sold into slavery by the clan that had left him, but he managed to get away. Temujin wed Borte in 1178; they had four boys and an undetermined number of daughters. After Borte was abducted as well, he undertook a daring rescue attempt to save her, and he soon started forging alliances, earning a reputation as a fierce fighter, and gaining an increasing number of supporters.

The oldest known source of Mongolian history and literature, « The Secret History of the Mongols, » which was published soon after Genghis Khan’s death, contains the majority of the information we have about his early years.

Unification of Mongols by Genghis khan

Temujin broke with tradition by placing capable allies rather than family members in important roles and by assassinating the heads of rival tribes while absorbing the remaining members into his clan. He gave the directive to hold off on any plunder until after a decisive victory and grouped his soldiers into ten-man units without regard to kinship. Temujin was an animist, but he also had Christians, Muslims, and Buddhists as his adherents. By 1205, he had defeated every foe, including Jamuka, his erstwhile close buddy.

The following year, he convened a gathering of representatives from every region of the territory and founded a country about the size of contemporary Mongolia. He was also given the title of Chinggis Khan, which roughly translates to « Universal Ruler » and was later shortened to Genghis Khan in the West.

Genghis Khan: Founder of the Empire

Genghis Khan unified the steppe tribes and governed over a million people. He removed inherited noble titles in an effort to reduce the traditional roots of tribal conflict. He also outlawed the buying and selling of women, the enslavement of any Mongol, and the execution of cattle thieves. Additionally, long before the concept of religious freedom spread abroad, Genghis Khan allowed freedom of religion, oversaw the adoption of a writing system, carried out regular censuses, and extended protection to foreign envoys.

Western China’s Xi Xia dynasty was the target of Genghis Khan’s first campaign outside of Mongolia. The Mongols started a significant initiative in 1209 that brought them to the doorstep of Yinchuan, the Xi Xia capital, following a series of attacks. The Mongols, in contrast to other armies, did not travel with a supply train other than a considerable reserve of horses. The majority of the army was made up of cavalrymen, who were skilled riders and lethal with a bow and arrow. The Mongols launched a siege at Yinchuan after using a feigned withdrawal, one of their defining strategies. The Xi Xia ruler gave in and paid the tribute.

The Jin Dynasty of northern China was the next target of the Mongols’ attack since its emperor had made the error of seeking submission from Genghis Khan. The outnumbered Mongols destroyed the countryside from 1211 to 1214 and drove hordes of refugees into the towns. Due to food shortages, the Jin army was forced to massacre tens of thousands of its own peasants. When the Mongols invaded Zhongdu (contemporary Beijing) in 1214, the Jin emperor consented to send over significant quantities of silk, silver, gold, and horses. Genghis Khan perceived the Jin ruler’s decision to shift his court to Kaifeng in the south as a breach of their agreement, and with the support of Jin deserters, destroyed Zhongdu.

Genghis Khan declared war against the Khwarezm Empire in 1219, occupying what are now Turkmenistan, Uzbekistan, Afghanistan, and Iran.  A trading agreement had been made with the local ruler, but as soon as the first caravan arrived, its goods were taken and its merchants were slaughtered.  Then, a few of Genghis Khan’s ambassadors were killed by the sultan.  The Mongol hordes swept through other Khwarezm cities, including Bukhara, Samarkand, and Urgench, despite the superiority of the Khwarezm armies in numbers.

Aristocrats and rebellious soldiers were typically executed, but skilled workers like jewelers and carpenters were typically preserved. In the meantime, unskilled workers were frequently employed as human shields during the subsequent attack. Nobody can say for sure how many people were killed in Genghis Khan’s conflicts, in part because the Mongols instilled fear by creating an image of brutality and terror.

End of Genghis Khan and the continuation of the Empire

Genghis Khan had vast swaths of country under his authority from the Sea of Japan to the Caspian Sea when he returned to Mongolia in 1225. Nevertheless, he didn’t take much time to rest before returning to the Xi Xia kingdom, which had declined to send troops to aid in the Khwarezm invasion. Early in 1227, a horse knocked Genghis Khan to the ground, injuring him badly. He continued the campaign despite his health never fully recovering. On August 18, 1227, he passed away right before the Xi Xia were destroyed.

More than any other person in history, Genghis Khan ruled over more than twice as much territory, bringing Eastern and Western civilizations together in the process. His descendants, notably Ogodei and Khubilai, were also ruthless conquistadors who seized power in many regions, including Eastern Europe, the Middle East, and the remainder of China. Before the Mongol Empire disintegrated in the 14th century, the Mongols even attacked Java and Japan. In 1920, the final surviving descendent of Genghis Khan was removed from power.

The Mongols and Genghis Khan are inevitably linked to horrific accounts of conquest, destruction, and bloodshed. The largest empire ever to exist was founded by this renowned clan leader and his immediate heirs, and it covered the whole Asian continent from the Pacific Ocean to present-day Hungary in Europe. The Empire could not have been created Without a clear strategy, outstanding organizational abilities, the fastest and toughest cavalry ever developed, an army of masterful archers, the existence of politically fragile states throughout Asia, and, of course, havoc and destruction.

However, Genghis Khan, his sons, and grandsons left behind them a continent united by the so-called Pax Mongolica (the Mongolian Peace), as well as a legacy of cultural advancement, artistic excellence, and a courtly way of life.