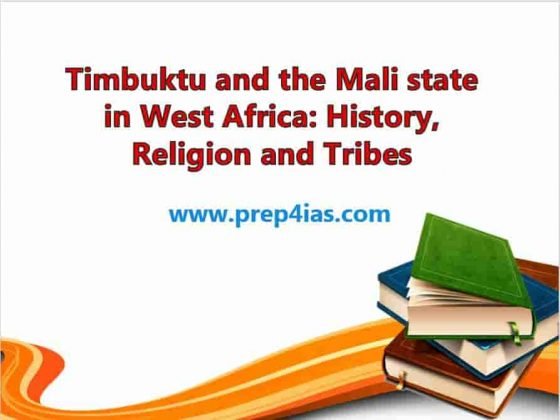 Timbuktu is located off the West African coast in Mali. Mali is further inland from the coastline and is land locked with Nigeria, Mauritania, and Algeria in the north, on its borders. Mali itself was established in the early part of the 12th Century, and Timbuktu in the 14th Century, in what was first informal settlements.

Timbuktu and the Mali State in West Africa: History, Religion and Tribes

Trading routes in many ancient communities in Africa were a mainstay of community existence, as much as elsewhere in ancient times.  Established trading routes moved closer inland in reach of Timbuktu, so prosperity increased and so too cities like Dao and small towns. Ivory, salt, Gold and even slaves were traded from several Sahara cities such as Begho of Boloman and Sijilmassa.

Before the 12th century a Ghana Empire existed, which bounded sub-regions of Mali. Koumbi Saleh, Tegdoust and Djenne’ as early towns not far from Timbuktu and the town of Dao were what was basically a greater portion of Mali, but also could have included part of the future regions that would make up Algeria. The Ghana Empire was dissolved in the 12th Century  by the older Sosso Empire of King Soumaoro Kante’ a successful but ruthless leader who did much to keep the Sosso Empire strong.

Muslim scholars had to move very carefully within these regions as they feared for their lives, so Timbuktu became a safe enough haven away from the Sosso empire, where they solidified Islamic teachings during the fractured existence of the religion at that time. It is clear in the future how Timbuktu would play a pivotal role in Islamic religious academics and teaching.

Timbuktu became truly part of the Mali empire in the early 14th century, but earlier iron age settlements which predate these times have also been discovered in the Timbuktu region like Djenne’, Dao and Dia(ka) in Mali. These were centres of different Mali groups such as the commune of Diaka at that time and today they still stand as Malian towns.

Communes such as Djenne and Diaka seem to have a religious significance. The lucrative trade routes had other spinoffs for the local Islamic faith and scholars. Centres of Islamic learning were a part of Timbuktu life. Sankore Madrasa was the main religious centre in Timbuktu, a temple perhaps not in the true individual sense but an Islamic academic Centre.

A lucrative trade in Islamic literature and books was also conducted through Sankore in Timbuktu, through the influence of the Islamic academics in Mali. Mali became a respected and formally centre of Islamic learning and religious academics.

Africa, based on its early records was not an Islamic continent from North to South, in the same sense that nearly all the Southeast Asian Basin became Buddhist exclusively during the same timelines as that of the Middle East. Certainly, the North-western and North African societies were influenced by and practiced Islam.

Islamic traders were a part of the trade routes from the Middle East and into North Africa, West Africa and Timbuktu, Mali. The Islamic traders during their interactions with African peoples, introduced Africans to Islam and participated in the Islamic learning centres and the Mosques used for worship. Conversions to the faith were and are subject to Islamic Sharia law, whether during ancient times or in the contemporary world.

In the case of some African kingdoms, chieftains and the emperors who ruled such Kingdoms, and did not rule with quasi-religious influences that were not traditionally practiced as part of their kingdom’s heritage, the interest in the spread of the faith was not always keenly accepted.

The Islamic communities, imams, worshipers, and Mosques were made aware of a particular kingdoms rule of its subjects by the sitting ruler during these times, that there would be no conflict of interest of the individual’s freedoms to convert to Islam and worship in the mosque alone with the kingdoms blessing. In fact, in some cases, chieftains did attend the Mosques in their kingdom, but kept their kingdoms rules close at hand. Their peoples adhered to the clan rules without religious interference or attempts to integrate vestiges of Sharia Law or any other religious patronage by expectation or force.

This association was accepted equitably and worked on this level for hundreds of years. The respect and influence of Islam at the time became a structured religion through the role these centres of learning played. As regards our subject matter here, Mans Musa the ruler of the Mali Empire was also the leader of the Sankore Madrasa Islamic ‘University’, Madras is in fact the Arabic word for school or University.

Mali and Timbuktu in the 12th – 14th centuries, cannot be described as a beginning timeline alone in North and West Africa, the region as in the times well before then probably predates to earlier periods. Timbuktu also became a major learning centre in the early 14th century.

The nomadic Tuareg tribes took control of the  city by force and inhabited it for a while in the early 15th century before the Songhai Empire expanded and annexed the city, making it part of their empire in 1468. The Songhai Empire covered parts of Sudan and Sahel, in the 15th century. It was considered one of the largest empires or states in Africa at the time.

The Songhai were an ethnic elite, being composed of the main Songhai people, based around the Gao city settlement. The early Sonni, ancestors of the  Songhai were present from the 11th Century, but at that time they were not a powerful civilization geographically. The Sonni dynasty emerged between 1464 - 1493.

The later Songhai too, experienced change as Askia Mohammad I of the Askia, became the dominant force within the Songhai dynasty, so their title changed to the Askia Dynasty in 1493. These changes may be  difficult to understand in our contemporary world, but they occurred through the influences of stronger fiefdoms. What was once a power dynasty, weakened over time, certain personalities would have larger support and would become leaders. A paradox of the open frontier society and principal in ancient times.

West Africa also had signs of prehistoric settlements of the iron age and further back possibly as far back as 11,000 years ago, after the last ice age, carbon dating can and has definitively indicated this, whether modern academics collectively, accept this is another matter. Understanding that ice ages were not climate specific but covered much of the continents on earth at the time some 11,500 years ago and earlier, holds its own answers in 45,000 years of modern human existence.

Timbuktu has thick under surface sand bar strata around the city, this makes archaeological digs and research almost impossible. There are lighter areas further out, that have receded revealing pottery shards on the surfaces, probably from the effects of erosion over time. Excavations by archaeologists in the mid 1980’s mapped the findings and effects and provided valuable insight into Timbuktu’s prehistory.

Not enough further contemporary interest since then has been developed to expand on earlier timelines, in the search for artifacts of ancient  community activity and what ethnic identifications can be established, habitations of previous unknown communities which may compare to established, recorded timelines.

The same anomalies exist in many places around the world of known ancient civilisations. These tend to stop at a certain archaeological timeline from the last recorded  research, with not much interest from an International historical aspect in ‘digging deeper’.

President Thabo Mbeki and the South African Government put money into the rejuvenation of Timbuktu in the late 1990’s. The records in Mali the academic libraries and academic resources at that time were almost depleted and had fallen into near disuse and the universities neglected. With the applied funds and individual involvement, much was achieved to rebuild places of learning, and at university level, which Timbuktu had been renowned.

Archaeology, laboratories, and trained academics are vital contributors to effective further research and discovery. The work of Graham Hancock internationally has made many sit up and listen but it has sadly also subjected Graham to open ridicule in the media from an academic level. The resistance to further research is clearly audible.