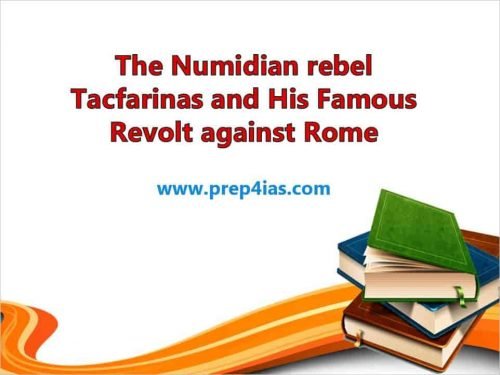 In this subject, we will talk about a character who is one of the most important figures in the ancient world, especially the Numidians of North Africa, because Tacfarinas is a character associated with the famous rebellion against the Romans in the service of his people. And in this context, we will study this character from the beginning, since his military service with the Roman army, as well as his rebellion against the Romans and the reasons behind that. After that, we will study the rebellion, how it took place, and how Tacfarinas exploited his military experience in Rome, and we will see how the end of this leader was.

Tacfarinas, who was of Numidian ancestry, deserted from the Roman auxiliary forces and began a war in 17 CE in North Africa against Rome and it ended with his death in 24 CE. Sources don't tell us much about his origins and military service.

The Numidian rebel Tacfarinas and His Famous Revolt against Rome

The reasons for the rebellion are not very clear, But all we got from the sources is that this conflict was related to the Roman policy towards the nomadic tribes of north Africa, creating the first borders and making a road that crossed through the traditional territories of tribes. But the main reason was the taxes that Rome imposed on the tribes of the region after its control of the field and recruitment to the Roman army. When Rome decided to demarcate the tribal areas under its control and impose more taxes, the native populations decided to react.

Tacfarinas was aware that the nearby Roman III Augusta Legion consumed a considerable quantity of the Numidian grain and much more was transported to Rome. Tacfarinas had great knowledge of Rome and its politics. He donned a blouse of Roman mail underneath the leopard hide that was slung over his shoulder, and a Roman Spatha cavalry sword hung at his side. Tacfarinas’ ancestors had lived in northwest Africa throughout the Roman era. When the Romans destroyed Carthage in 146 BC, they had established a firm base. Rome expanded her influence into the nearby Numidian Berber kingdom.

Rome’s economic policy encouraged the growth and prosperity of cities, agriculture, and trade. Roman suburbs supported thriving olive, date, palm, and grape plantations. Roman Egypt and Africa took Sicily’s place as the primary wheat-producing regions of the empire. The Numidians gave up their original nomadic lifestyle and adapted to farming.

The Aures Mountains, an extension of the Atlas Mountains to the east, are located away from the coastal plains. The pastoral way of life that the Eurasian horsemen who had conquered among older cultures thousands of years ago had left behind was carried on by the Berber tribes on the high plateaus. Their herds were numerous; the Greek historian Polybius claimed that Africa was the place where he had seen the greatest number of sheep, goats, cows, and horses. 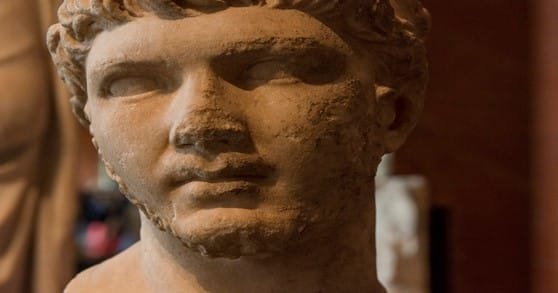 The Musulamii now found wheat fields. To keep the flocks of nomads out, fences were built across the land. The last straw was a new Roman road that cut directly through the seasonal migration routes from Tacape (Gabes) on the coast to Ammaedara in Musulamii land (the Limes). Rome tried to keep an eye on the movements of the nomadic tribes from Ammaedara. Patrols of the Romans examined tribal areas that were to be given to settler farmers. Romans turned a deaf ear to Musulamii requests for land concessions that honored their natural grazing grounds.

Between helping Rome and caring for his Musulamii people, Tacfarinas struggled. He ran away, giving up the opportunity to become a citizen and have a fulfilling life within the empire.

According to the Roman historian Publius Cornelius Tacitus, Tacfarinas initially only led vagabonds and marauders. However, Tacfarinas gave his soldiers a rigorous Roman education and used them in guerilla tactics. Tacfarinas finally rose to the position of Musulamii chief. More tribes were won over by his brave exploits. Old Musulamii allies, the Gaetulians, arrived from Numidia’s southernmost region, closest to the desert. The large Cinithii tribe and the well-known Mauri tribes (Moors) from the coast of neighboring Mauretania.

Proconsul Marcus Furius Camillus, the ruler of Africa Proconsularis, got ready to lead the III Augusta Legion and auxiliaries - a total of about 10,000 soldiers - against the rebels. Camillus, however, was knowledgeable enough to put an end to the rebellion before it expanded further. He also couldn’t undervalue the enemy. A sobering lesson was provided by the tragedy of Proconsul Cornelius Lentulus, who died before the most recent major tribal uprising after marching too far into the desert in the year 3 AD.

Camillus relied on his legionaries’ fidelity, passion, and the expertise of his centurions in the impending conflict. The 60-year-old III Augusta Legion had subsequently received replacements from all around the empire, having been originally recruited from Latinized Celts of Roman Gaul and Italians.

Tacfarinas became overconfident after his early triumphs. Marcus Furius Camillus assembled his troops in 17 CE, and with the support of Emperor Tiberius, they engaged the enemy forces in open combat and defeated them.

Tacfarinas managed to flee and picked up his battles again the next year. Before deciding to attack the Roman cohort, he first engaged with little robberies before progressively migrating to plunder the countryside. Dekrius was in charge of the surrounding castle. He prepared his troops for battle by positioning them on a field. Because the Roman soldiers disobeyed their commander and dispersed under enemy pressure, Tacfarinas was able to win.

Tacfarinas attacked another stronghold after his victory and felt more confident. Due to Lucius Apronius’s punishment of some soldiers, the duty of Roman soldiers was intensified. 500 veterans fought against the rebels when the city of Thala was attacked. Tacfarinas’ victory strike was broken when the Numidians in this battle were forced to escape.

He consequently stopped engaging in open combat with garrisons and concentrated on excursions into undefended estates to steal. The Romans were unable to capture the continually roving gangs or inflict more significant losses on them, nor were they able to protect each of the settlements. After a few years, it was finally feasible to attack the rebels because Tacfarinas’ troops were compelled to construct a permanent base where they could keep their booty.

The Romans discovered the enemy camp, where Apronius Caesianus, the governor’s son, had dispatched troops supported by the most agile legionaries. The Roman cohort prevailed in the battle to end it.

Tacfarinas persisted and continued to launch additional assaults. In order to finally put an end to the insurrection, Tiberius advised the senate that the next proconsul of Africa should be a man with experience in combat. Quintus Junius Blezus was there. He was given instructions to battle fiercely as well as additional backup in the form of Legio IX Hispana, which had been transferred from Pannonia. The fact that Tacfarinas sent a message to the emperor requesting that he and his troops be granted lands and threating a perpetual war also contributed to Tiberius’ reluctance.

Knowing he couldn’t rely on the enemy to engage in an open battle, Blezus made the decision to employ a military tactic. In order to attack the enemy gangs from various angles and lead them to the locations of ambushes, he divided his army into three divisions. The columns broke up into even smaller groups. As the battle intensified and kept attacking, The Romans, who believed the conflict was over, only withdrew after capturing the brother of the rebel Tacfarinas. The emperor honored Blezus and decorated him with triumphal decorations.

Tacfarinas took advantage of the troops’ withdrawal to disseminate the rumor that Roman rule was beginning to crumble due to external pressure. He received the backing of many groups, including those who opposed Ptolemy’s reign and want to uphold the emperor, such as the inhabitants of Mauritania. The King of Garamants also sided with him and dispatched more soldiers. All of this was done to persuade the people to deal with the remaining Romans there, which resulted in the siege of Tubuskum, a city on the border of Mauritania. A different proconsul, Publius Cornelius Dolabella (23–24 CE), took charge of the city’s defense and restoration. He gave the order to execute numerous Musulamii governors who planned to treason.

Dolabella separated his men similarly to Bezos, choosing four columns of fewer soldiers to attack the dispersed opposing forces. In the year 24 AD, in the region of Auzi (now known as Soure El-Ghazal, in Algeria), there was a camp of rebels under the command of Tacfarinas.

The Romans avenged their earlier losses to the Numidians, who were completely unprepared for battle. The war finally ended with the death of the rebel Tacfarinas and his son in the battle. Tacfarinas didn’t want to be paraded before a crowd of cheering onlookers, be put in a gloomy prison with Roman chains around his wrists, or be executed. Tacfarinas threw himself on the Roman spearheads like a cornered lion of the desert. According to Tacitus, his death had cost the Romans dearly.

Concerning the allies of Tacfarinas, Ptolemy received an ivory scepter, a victorious toga, and a salutation from the Senate referring to him as king, ally, and friend of the Roman people in recognition of his fidelity as the ruler of Mauritania. In turn, the King of Garamantes submitted to the rule of Rome.

The Roman Empire’s success also meant that the Roman government operations in Africa could continue. The completion of the cadastral separation of distinct regions in the years 29 and 30 permitted an increase in taxes while also restricting the movement of southern tribes.

The Romans classified the Tacfarinas rebellion as Latrocinum because it was associated with guerilla conflict. The historian Tacitus, who was one of the most important sources that transmitted the events of this revolution and who was biased towards the Roman Empire, considered Tacfarinas a greedy, deserter, and barbarian rebel who wanted to achieve his ambitions through footing and robbery.

This is also a criticism of Emperor Tiberius’ policy  But in examining the events of the Tacfarnas rebellion, we find that Tacfarinas also made use of the military strategies he had learned about while serving in the Roman army. When he built an elite unit with Roman weapons as well as various elements of the indigenous army, he used it, particularly in the early stages of rebellions. He was constrained to guerrilla battles only after losing to Camillus.

It’s unlikely that the nomadic Berbers ever stood a chance of escaping Roman’s cultural and political rule. Nevertheless, the classical Berber culture survived the empire. So even today, Berber kids eagerly welcome Westerners to their hillside villages with the cry Arrumi, which is Berber for Roman.  Tacfarinas guided their forefathers in challenging and occasionally even defeating Rome’s illustrious legions two thousand years ago for eight hard years.

Until this day, Tacfarinas consider one of the most important heroes of the Numidian resistance like Jugurtha who preceded him, and he showed great courage in the face of the Roman war arsenal with an army made up of Numidian tribes that were experienced in fighting, especially in the foothills of the mountains, and resisting the enemy throughout its history. This leader, who preferred to support ad serve his people over the luxurious life he was living in Rome, provided a lesson in heroism and fierce resistance, and it is still engraved in the history’s memory of the Roman Empire. His popular resistance also delayed the occupation of Numidia by the Romans.