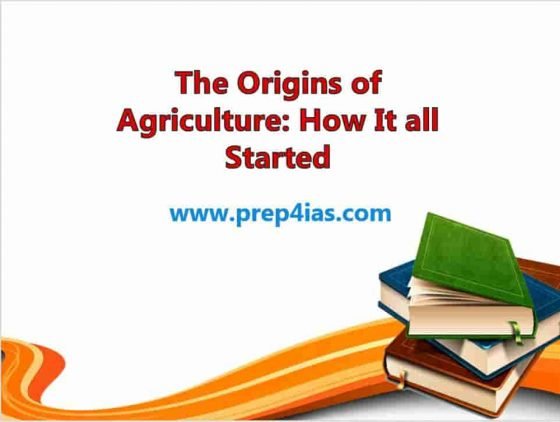 The history of agriculture is the tale of how people have created and refined systems for cultivating plants and animals in order to provide food, fiber, fuel, and other products. Humans were hunters and gatherers before plant cultivation was invented. Clans and tribes were able to remain in the same place for many generations thanks to the knowledge and expertise gained by understanding how to cultivate the soil and support plant growth. Archaeological data suggests that these processes took place 10,000 years ago or earlier.

The Origins of Agriculture: How It all Started

A further factor in the development of human communities and cultures was the development of cities and trade connections between various geographic areas and ethnic groupings thanks to agriculture. In the years before and following the Industrial Revolution, agriculture played a significant role in economics. The long-term existence of the species depends on the sustainable development of the global food supply, hence care must be made to keep agricultural practices in balance with the environment.

The earliest instances of agriculture are thought to have originated in Southwest Asia, though it is thought to have spread to other regions as well. It is difficult to pinpoint the precise inception of agriculture because, in certain regions, the shift away from solely hunter-gatherer society started many thousands of years before the development of writing. However, archaeobotanists and paleoethnobotanists have connected the cultivation of particular food plants, like a semi-tough rachis and bigger seeds, to the early Holocene in the Levant area of the Fertile Crescent, right after the Younger Dryas (about 9,500 B.C.E.).

Much older data, such as anthropological and archaeological findings from various locations in Southwest Asia and North Africa, support the use of wild grains (such as from the ca 20,000 B.C.E. site of Ohalo II, many Natufian sites in the Levant and from sites along the Nile in the 10th millennium B.C.E.). A rye grain with domestic characteristics has been discovered in contexts from the Epi-Palaeolithic (10,000+ B.C.E.) at Abu Hureyra in Syria, but this appears to be a localized phenomenon resulting from the cultivation of stands of wild rye rather than a definitive step towards domestication. This is the very first evidence of planned cultivation and trait selection.

The eight so-called founder crops of agriculture don't exist until after 9,500 B.C.E.: first emmer and einkorn wheat, then peas, hulled barley, bitter vetch, chickpeas, lentils, and flax. On Pre-Pottery Neolithic B sites in the Levant, these eight crops appear more or less concurrently, however it is generally agreed that wheat was the first to be sown.

Sowing and harvesting had spread to Mesopotamia, By 7000 B.C.E, where Sumerian ingenuity systematized and scaled it up in the incredibly fertile land immediately north of the Persian Gulf. Agriculture has become established on the banks of the Nile River by 6000 BCE. Around this period, autonomous agricultural development took place in the Far East, most likely in China, with rice replacing wheat as the main crop. Around 3000–2700 B.C.E., maize was first domesticated in the Americas, most likely from teosinte, however, there is some archeological evidence of considerably earlier history.

The development of many more plants, including the potato, tomato, pepper, squash, various bean varieties, and others occurred in the New World, as did the massive terracing of steep hillsides throughout most of Andean South America. The island of New Guinea likewise independently evolved its agriculture.

Climate change may have contributed to the growth of agriculture, but there may also have been social factors (such as the accumulation of food surplus for competitive gift-giving as in the Pacific Northwest potlatch culture). Certainly, over a considerable amount of time during which some crops were intentionally grown and other foods were foraged in the wild, there was a progressive transition from hunter-gatherer to agrarian economies. Although the preferred theory for the origins of agriculture in the Levant is localized climate change, the fact that farming was "created" at least three times elsewhere and possibly more implies that societal factors may have played a role.

It wasn’t until the Bronze Age that people were completely dependent on domesticated plants and animals, at which point natural resources only made up a small portion of the average diet in terms of nutrition. The Sumerians, who began cultivating land intensively on a large scale around 5,500 B.C.E., would be considered the inventors of agriculture if organized irrigation, mono-cropping, and the use of a specialized labor force are included in the definition of agriculture. Hunting and gathering cannot support a population density as high as that allowed by intensive farming, which also enables the accumulation of surplus goods for off-season consumption, sale, or barter.

The key element in the development of standing armies was the ability of farmers to feed vast populations of individuals whose activities had nothing to do with the production of material products. Sumerian agriculture enabled significant territorial expansion and intense conflict between cities, making them the first empire constructors. Soon after, thanks to farming in the fertile Nile Valley, the Egyptians attained a population density from which they could recruit enough warriors for a territorial expansion that more than tripled the extent of the Sumerian empire.

From Iran to Anatolia and the Levant, as well as in China’s semiarid loess plains and humid Yangtze valley, the Old World saw the development of established life on the higher land. The alluviums of the Nile, Euphrates, and Tigris rivers, on the other hand, saw the development of the oldest civilizations built on sophisticated and productive agriculture. In the later part of the 7th millennium BP, the Euphrates valley was home to towns and villages. The people quickly spread out across the accessible region, settling in hamlets and villages. Additional services that the hamlets themselves could not supply were given by larger settlements.

The big discovery came when prehistoric man recognized that he should save some seeds, plant them, and wait for them to bear seeds rather than consume all of them. With this development, he would be able to construct strong homes and settle down permanently or semi-permanently. Agriculture’s history has played a significant role in human civilization. Agriculture once employed the majority of the human race, and few, if any, people could stay alive without it today.