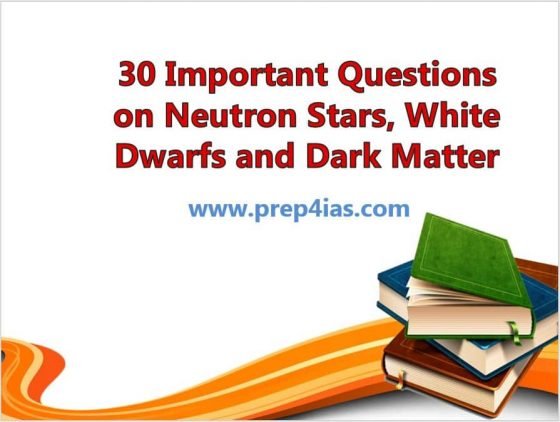 In the field of astronomy, the concept of Neutron Stars, White Dwarfs and Dark Matter are very important to understand its significance and impacts in the Universe. There are number of stars born and die everyday in which few of them turn into Neutron Stars and White dwarfs at their life's end. In the past few years, a lot of study has also been done to understand the Dark matter which forms an integral part of our Universe. Here we will see 30 Important Questions on Neutron Stars, White Dwarfs and Dark Matter to understand them further.

Ans. Neutron stars are the remnants of giant stars which reached its life span and then died in a fiery explosion known as a supernova.

Ans. When the star explodes after reaching its life span, there is an incredible dense core left behind with intense pressure. This pressure crush the other sub-atomic particles like protons and electrons and form yet more neutrons.

Ans. Dark matter is an invisible form of matter that is postulated to exist in space and can take different forms including the weak interacting particles or high energy moving random particles.

Ans. As per Scientific community, dark matter could be composed of either baryons or it could be non-baryonic which means it is made of different types of particles.

5. How much of the universe is dark matter ?

Ans. About 27% of the Universe is dark matter.

7. Does dark matter have gravity ?

Ans. The dark energy does not have any local gravitational effects, but rather a global effect on the universe as a whole. This leads to a repulsive force, which tends to accelerate the expansion of the universe.

8. How do we know dark matter exists ?

Ans. Dark matter is completely invisible as it emits no light hence it cannot be seen.

Ans. Any star with mass less than 1.4 times the solar mass is destined to become a white dwarf star.

Ans. The Sun is a 4.5 billion-year-old yellow dwarf star.

12. Which is the brightest Neutron star ?

Ans. A typical white dwarf is half as massive as the Sun, yet only slightly bigger than Earth.

Ans. Neutron stars are formed when a massive star runs out of fuel and collapses. The very central region of the star – the core collapses, crushing together every proton and electron into a neutron.

Ans. Yes, dark matter does interact gravitationally with all the matter that includes black holes as well. There are some recent evidences found which suggest that dark matter might consist of concentrations of ancient black holes.

Ans. The latest study theorizes that all the primordial black holes formed after the Big Bang constitute all dark matter in the Universe.

Ans. Although most of the Universe's mass is dark matter, which gravitates just as well as normal matter, it still can't make black holes.

20. How fast can Neutron Stars spin ?

Ans. Neutron stars have a radius on the order of 10 kilometres (6 mi) and a mass of about 1.4 solar masses.

23. Why do white dwarf stars have low luminosity ?

Ans. A white dwarf's faint luminosity comes from the emission of residual thermal energy, no fusion takes place in a white dwarf.

24. What is the size of a typical white dwarf star ?

Ans. White dwarfs are usually about the size of Earth.

25. Is a white dwarf star is about the same size as the Sun ?

Ans. A typical white dwarf is about as massive as the Sun, yet only slightly bigger than the Earth.

27. How do we know that pulsars are neutron stars ?

Ans. Neutron star with strong electromagnetic fields observed to have pulses of radiation at very regular intervals that typically range from milliseconds to seconds resulting into pulsar. More on NASA website.

28. Why do some massive stars become neutron stars ?

Ans. The gravitational collapse in a massive star after the supernova explosion tends to compress it so much that every electron and proton gets crushed into a neutron and hence form Neutron star.

29. What is the diameter of a Neutron star ?

Ans. The average diameter of Neutron star is only about 12 miles.

30. Which star is the brightest white dwarf ?

Ans. Sirius B is the brightest known white dwarf star.