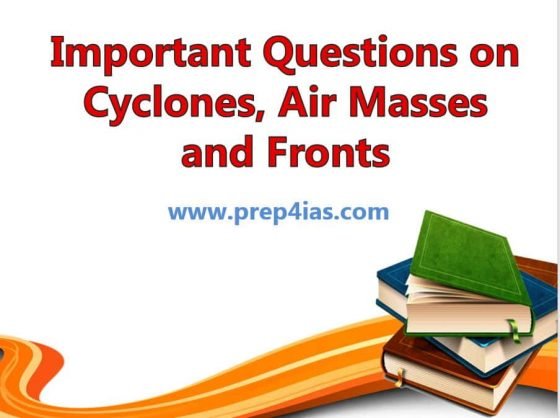 In this article, I will take you through 32 Important Questions on Cyclones, Air Masses and Fronts. The terminology Cyclone, meaning “Coil of a Snake” was first used by Henry Piddington in 1842 in his thesis, Laws of the Storms. Cyclone is basically a low pressure area which forms over the tropical regions all around the year. However intensity can be varied based on conditions. We will looking all the frequently asked questions related to cyclone and other important phenomenon like Air Masses and Fronts. More on NOAA.

Ans. It is a large mass of air covering a considerable amount of area with uniform temperature and humidity in any horizontal direction.

2. What are different types of Air Masses ?

Ans. Below are different types of Air Masses:-

4. What is occluded front ?

5. What are different types of fronts ?

Ans. Below are different types of fronts:-

6. Identify the name of wind based on below condition.

b)A warm wind flows in leeward side of the mountains.

c)It can change the temperature up to 20 degree celsius.

7. What are different types of Atmospheric Lifting Mechanisms ?

Ans. Below are the different types of atmospheric Lifting mechanisms:-

8. What is the average speed Cold Front can attain ?

9. What is the average speed Warm Front can attain ?

Ans. The leading edge of a Cold air mass is known as Cold Front.

Ans. The Leading Edge of a Warm air mass is known as Warm Front.

12.  Which front develops along the Arctic coasts of Siberia and North America ?

13. Which front forms over Mediterranean-Caspian Sea areas in winter ?

14. What is the Tropical Cyclone name in Philippines ?

15. What are the weather conditions required for the formation of Tropical Cyclone ?

Ans. Following are the weather conditions required for the formation of Tropical Cyclones:-

16. What is the usual diameter of tropical cyclones ?

17. Where is the maximum originating frequency of tropical cyclones ?

Ans. Between 10 degree to 20 degree latitudes

18. What will be the direction of Tropical Cyclones in Northern Hemisphere ?

19. What will be the direction of Tropical Cyclones in Southern Hemisphere ?

Ans. The leading edge of advancing air mass is called its front.

Ans. A tropical cyclone is a rapidly rotating storm system characterized by a low-pressure center, a closed low-level atmospheric circulation, strong winds, and a spiral arrangement of thunderstorms that produce heavy rain and/or squalls.

22. What is the difference between a cyclone and a hurricane ?

Ans. Both Cyclone and Hurricane are the same thing. They are known by different names based on their origin. Hurricanes are tropical storms that form over the North Atlantic Ocean and Northeast Pacific. Cyclones are formed over the South Pacific and Indian Ocean.

Ans. Bomb Cyclone is a term used by meteorologists to indicate a mid latitude cyclone that intensifies rapidly.

24. What are midlatitude cyclones ?

Ans. These are also known as extra-tropical or frontal cyclones. These weather systems are named for occurring in the middle latitudes of the earth.

25. What is the difference between a Cyclone and a Tornado ?

Ans. Cyclone forms in tropical regions mostly over the oceans whereas Tornado is a land based storm.

Ans. A Cyclone storm is a rapidly rotating storm characterized by a low-pressure center and strong rotating winds.

27. Where do continental air masses form ?

Ans. Continental air masses form over land and are dry.

28. Where are tropical cyclones found ?

Ans. Tropical cyclones form only over warm ocean waters near the equator.

Ans. Winds and air currents cause air masses to move

Ans. An air mass forms whenever the atmosphere remains in contact with a large, relatively uniform land or sea surface for a time sufficiently long to acquire the temperature and moisture properties of that surface. The Earth’s major air masses originate in polar or subtropical latitudes.