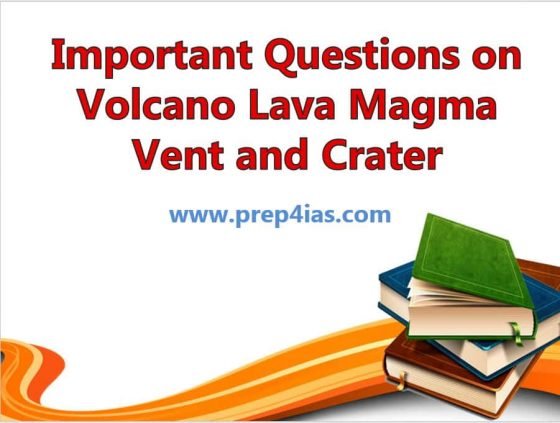 In this article, I will take you through 62 important questions on Volcano, Lava, Magma, Vent and Chamber. Volcanic eruptions are frequent activity that happens all the time around the world due to various reasons. A volcano could be either in dormant or in active state. Here we will go through all the important questions related to volcano, its types and other associated events.

Ans. A Volcano is a rupture or opening in the crust of a planetary mass object that allows lava, volcanic ash and gases to erupt from Magma Chamber.

Ans. A Stratovolcano also known as composite volcano, is a tall and conical volcano built up by many strata of hardened lava and tephra.

3. What is Shield volcano ?

Ans. A shield volcano is a type of volcano named for its low profile, resembling a warrior’s shield lying on the ground.

4. What is Caldera volcano ?

Ans. A caldera is a large circular or oval shaped depression that forms shortly after the emptying of a magma chamber in a volcanic eruption.

5. What is Andesitic Stratovolcano ?

Ans. A Stratovolcano which erupts andesite, and form small-volume flows that typically advance only short distances down the flanks of a volcano is called Andesitic Stratovolcano.

Ans. Below conditions are required to make a volcano beneath the earth surface:-

7. How are Volcanoes formed ?

Ans. Due to intense pressure and temperature below the earth surface, rocks gets melted and changed into molten form called magma. Since magma is lighter than the solid rocks, so it will rise and gets collected into a chamber called Magma Chamber. Over the time, more and more magma gets collected, eventually some of the magma gets pushed out to the surface through vents and fissures thus forming volcano.

8. What causes a Volcano to erupt ?

Ans. Since the molten rock which is called magma are lighter than the solid rocks, so it tend to rise in magma chambers from where it gets pushed to surface through vents.

9. How do Volcanoes erupt ?

Ans. When rock from the mantle melts, moves to the surface through the crust, and releases pent-up gases, volcanoes erupt.

11. Where is Yellowstone volcano located ?

Ans. It is located in United States

12. How big is Yellowstone volcano ?

Ans. It measures approximately 30 by 45 miles (50 by 70 km), covering a large area of the Yellowstone National Park.

13. Where are the most volcanoes located ?

Ans. Along the belt of Ring of Fire

14. How many Volcanoes are in Hawaii ?

Ans. Hotspot volcano is an area of the Earth’s mantle from which hot plumes rise upward, forming volcanoes on the overlying crust.

17. What type of Volcano is Mount Fuji ?

18. Where do most volcanoes occur ?

Ans. Along the belt of Ring of Fire which encircles Pacific Ocean.

19. What type of volcano is Mount Yasur ?

Ans. Dormant Volcanoes are volcano that have not erupted in a long time but are expected to erupt in future.

21. What type of volcano is Mount Vesuvius ?

23. What are the three types of Volcanoes ?

Ans. Three types of Volcanoes are:-

Ans. A cinder cone is a steep conical hill of loose pyroclastic fragments, such as volcanic clinkers, volcanic ash, or cinder that has been built around a volcanic vent.

25. What is the largest volcano in the world ?

26. What type of Volcano is Kilauea ?

27. What type of Volcano is Mount Rainier ?

Ans. A volcanic arc is a chain of volcanoes formed above a subducting plate, positioned in an arc shape as seen from above.

29. How many Active volcanoes are there in Nicaragua ?

30. How does subduction lead to Volcanic Activity ?

Ans. Stratovolcanoes tend to form at subduction zones, or convergent plate margins, where an oceanic plate slides beneath a continental plate and contributes to the rise of magma to the surface.

31. How many Craters does the Masaya volcano have ?

32. How do Shield Volcanoes form ?

Ans. Shield Volcanoes usually formed by the eruption of low viscous lava(highly fluidic), which travels further and forms thinner flows than the more viscous lava erupted from a stratovolcano.

33. How are Volcanoes formed by plate tectonics ?

Ans. Plate tectonics plays an important role in the formation of volcanoes on Land as well as on Sea Floor. Usually a thin, heavy oceanic plate subducts, or moves under, a thicker continental plate. When enough magma builds up in the magma chamber, it forces its way up to the surface and erupts, often causing volcanic eruptions.

Ans. Magma can have a temperature around 1200 degree celsius.

36. What type of volcano is Krakatoa ?

37. How do volcanoes form at convergent boundaries ?

38. What type of Volcano is Mount Etna ?

39. What is the difference between Magma and Lava ?

Ans. When molten rock is still beneath the earth surface, then it is called Magma. Once it reaches the surface then it is known as Lava.

Ans. When magma comes out of the earth surface it is known as Lava.

Ans. Lava temperature can be as high as 1200 degree celsius.

Ans. Lava is mostly made of Silicon and Oxygen. Together, they make a very strong bond and then get together with other elements, like Fe (iron), Mg (magnesium), K (potassium), Ca (calcium), and more.

Ans. When molten rock is still underground, it is known as Magma.

Ans. Magma temperature can reach well up to 1200 degree celsius.

Ans. Magma originates in the lower part of the Earth’s crust and in the upper portion of the mantle.

47. Which type of Magma has the greatest Silica Content ?

Ans. Felsic Type of Magma has the greatest Silica Content.

Ans. A Magma Chamber is a large pool beneath the earth surface acts as reservoir of liquid rocks, also called magma.

49. What type of rock forms when magma cools ?

50. When will magma rise to Earth’s surface ?

Ans. When enough magma builds up in Magma Chamber then it forces its way out to the earth surface through fissure and vents.

51. Why does Magma rise to the surface ?

Ans. Magma can rise when pieces of Earth’s crust called tectonic plates slowly move away from each other. Magma also rises when these tectonic plates move toward each other. The high heat and pressure generated due to this movement cause the crust to melt and rise as magma.

52. What type of volcano is Sakurajima ?

53. What are hydrothermal vents ?

Ans. A hydrothermal vent is a fissure on the seafloor from which geothermally heated water discharges. Hydrothermal vents are commonly found near volcanically active places, areas where tectonic plates are moving apart at spreading centers, ocean basins, and hotspots.

Ans. A Volcano vent is an opening or spot on the earth surface through which Volcanic gases, lava and ash materials emits.

Ans. A crater in a volcano is generally a depression in bowl shape which forms due to various volcanic activities.

56. What is the largest volcanic crater in the world ?

57. What type of volcano is crater lake ?

58. What type of volcano is Mount Merapi ?

59. What type of volcano is Mount Nyiragongo ?

61. How many volcanoes are in the Ring of Fire ?

62. What are different types of Magma ?

Ans. There are three different types of Magma:-