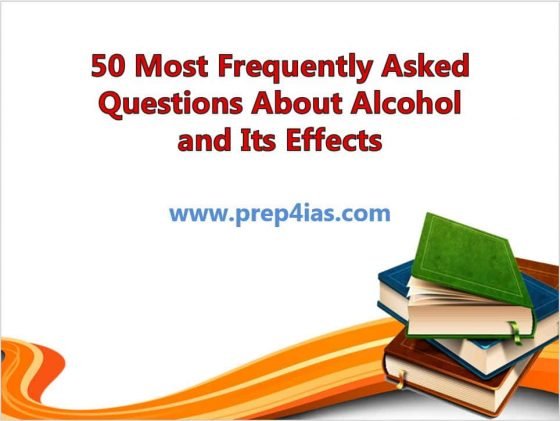 In this article, I will take you through 50 Most Frequently Asked Questions About Alcohol and its effects on human body. Alcohol has been very popular since very long time especially in Western and European countries. Today in our societies alcoholic beverages are a routine part of the social landscape for many in the population. This is particularly true for those in social environments with high visibility and societal influence, nationally and internationally, where alcohol frequently accompanies socializing.

In this context, it is easy to overlook or discount the health and social damage caused or contributed to by drinking. Hence we will see some of the most frequently asked questions about alcohol and its effects on people’s health and body. More on WHO official website.

Most Frequently Asked Questions About Alcohol and Its Effects

Also Read: 25 Important Questions on Transport and Communication in the World

Ans. Alcohol is a chemical substance called ethanol or ethyl alcohol which find its usage in multiple places like in making different wines and beverages, medicines, sprays and disinfectants etc.

2. How long does alcohol stay in your System ?

Ans. Alcohol is detectable for up to 6 hours in blood after consumption; about 12-24 hours in breath, urine, and saliva and up to 90 days in hair.

3. Can you drink Alcohol after Covid Vaccine ?

Ans. It is safe to drink regulated quantity of alcohol after Covid vaccine.

4. Can you Spray Alcohol on Plants ?

Ans. Regulated amount of alcohol spray are usually effective against Plants pests like mealy bugs, whiteflies, red spider mites, aphids, fungus gnats, and scale. But one needs to very carefully use on the plants as sometimes it might show some adverse effects depending on which plant you are using the spray.

5. Is Alcohol a Depressant ?

Ans. Alcohol is classified as a Central Nervous System Depressant. It slows down brain functioning and neural activity.

Ans. Alcohol, sometimes referred to by the chemical name ethanol, is a psychoactive drug that is the active ingredient in drinks such as beer, wine, and distilled spirits (hard liquor). More on wikipedia.

Ans. Sugar alcohols are sweeteners that have about half the calories of regular sugar. They occur naturally in certain fruits and vegetables.

Ans. Consuming too much alcohol can raise the blood pressure to unhealthy levels.

Ans. The percentage of alcohol in a standard beer could be around 5%-7% ABV(Alcohol by Volume).

Ans. Alcohol produces both stimulant as well as sedating effects as it slows down the activity of Central Nervous System.

Ans. According to its website, White Claw is made from a blend of seltzer water, a gluten free alcohol base, and a hint of fruit flavor.

12. Can you drink alcohol while taking antibiotics ?

Ans. Modern antibiotics are relatively safer and can be consumed while someone is taking antibiotics considering that he/she is not suffering from Liver or any other diseases.

13. How long does alcohol stay in your Urine ?

14. How long does it take alcohol to leave your System ?

Ans. Alcohol is detectable for up to 6 hours in blood after consumption, about 12-24 hours in your breath, urine, and saliva and up to 90 days in hair.

Ans. Sealed Alcohol can last longer but once it is opened it comes in contact with oxygen and hence gets oxidized then one has to finish that bottle within a day or two before it becomes unfit for consumption.

16. How long does Alcohol Stay in your Blood ?

Ans. If you blood alcohol level is around 20 mg/dl then it takes around one hour to metabolize the alcohol.

17. How long does Alcohol withdrawal last ?

Ans. If someone is heavily consuming alcohol regularly and suddenly stop consuming and then the person is likely to experience withdrawal symptoms. To deal with it, the person has to go through detox or rehab program.

Ans. The percentage of alcohol in wine usually varies. It contains somewhere between 5% to 16% with an average of about 11%.

19. How does alcohol affect the Brain ?

Ans. Modern ginger beer is not fermented, but is instead carbonated, making it a soft drink. This ginger beer typically contains less than . 5 percent alcohol, and is not classified as an alcoholic beverage.

Ans. Well, it is always advisable to consume regulated quantity of alcohol as excessive consumption might lead to headaches, severe dehydration, nausea, vomiting, diarrhea, and indigestion. On a long term, it might also cause detrimental heart effects.

22. What is Alcohol Poisoning ?

Ans. It is a condition of increase in blood alcohol to dangerous levels due to too much consumption in very short of time.

23. What is denatured Alcohol ?

Ans. Denatured alcohol is ethanol that has additives to make it poisonous bad-tasting, foul-smelling, or nauseating to discourage its recreational consumption. More on wikipedia.

24. Which alcohol is not bad for Stomach ?

Ans. According to the pH level, gin, tequila, and non-grain vodkas are the lowest acidity options, choosing drinks made with these alcohols will be best on your stomach.

25. Does alcohol thin your blood ?

Ans. Alcohol can thin your blood, because it prevents blood cells from sticking together and forming clots. This may lower your risk for the type of strokes caused by blockages in blood vessels.

26. Is Isopropyl alcohol the same as rubbing alcohol ?

Ans, No, Both Isopropyl alcohol and rubbing alcohol are different.

Ans. As of now, there is no scientific evidence that proves alcoholism can be genetic.

Ans. Alcohol is also known by its chemical name ethanol or ethyl alcohol. It is a very active ingredient in lot of medicinal drugs.

Ans. The notion that drinking kills brain cells in incorrect. Instead, alcohol affects the brain in other ways, for instance, by damaging the ends of neurons. This can make it difficult for those neurons to send important nerve signals. Alcohol may also damage the brain by increasing the risk of strokes, head injuries, and accidents.

32. Can alcohol cause diabetes ?

Ans. Drinking too much alcohol in a very short period of time may cause chronic inflammation of the pancreas (pancreatitis), which can impair its ability to secrete insulin and potentially lead to diabetes.

33. Does alcohol cause Inflammation ?

Ans. Consumption of too much alcohol may lead to chronic inflammation of the pancreas, also called pancreatitis.

34. Can you take Melatonin with Alcohol ?

Ans. Both Melatonin and alcohol act as sedatives. Taking both may lead to over sedative effect hence not recommended to use Melatonin with alcohol. Always consult your doctor before using it.

35. Can you take Ibuprofen with Alcohol ?

Ans. Usually large quantity of alcohol consumption is not recommended with Ibuprofen but small quantity can be relatively safer. It should be used with caution if you have certain pre medical conditions like Liver problem. Always consult your doctor before using it.

36. Can you drink alcohol while taking Amoxicillin ?

Ans. In general, Modern antibiotics does not have any negative impact while taking with antibiotics.

37. What are the Short Term effects of alcohol in human body ?

Ans. Potential short-term effects of alcohol include hangover and alcohol poisoning, as well as falls and accidents, conflict, lowered inhibitions and risky behaviors.

38. What are the Long Term effects of alcohol in human body ?

Ans. Alcohol contributes to over 200 diseases and injury-related health conditions including dependence and addiction, liver cirrhosis, cancers, and unintentional injuries such as motor vehicle accidents, falls, burns, assaults, and drowning.

39. What is Fetal Alcohol Syndrome ?

Ans. It is a congenital syndrome associated with excessive consumption of alcohol by the mother during pregnancy, and characterized by retardation of mental development and of physical growth, particularly of the skull and face.

Ans. Rubbing alcohol is either an isopropyl alcohol or an ethanol-based liquid, or the comparable British Pharmacopoeia (BP) defined surgical spirit, with isopropyl alcohol products being the most widely available.

41. What is blood Alcohol Concentration ?

Ans. It refers to the percent of alcohol (ethyl alcohol or ethanol) in a person’s blood stream.

42. What part of the brain does alcohol affect ?

Ans. The Cerebellum in the brain is the most affected region due to alcohol consumption.

Ans. Eggnog contains rum, brandy or bourbon, and Brown likes to start with a combination of dark rum and cognac.

Ans. As of now there is no scientific evidence of any gene that causes alcoholism.

45. How long does alcohol stay in your breath ?

46. How long does alcohol stay in your Saliva ?

47. How long does alcohol stay in your hair ?

48. Does Kombucha have alcohol ?

Ans. Commercial kombucha tea is labeled non-alcoholic, as it contains less than 0.5% alcohol.

49. Can taking shots of alcohol help kill a fever ?

Ans. During any kind of fever or flu, drinking alcohol will dehydrate your body and will further reduce the body fluids. This will further worsen the fever or flu and might lead to digestive problems as well.

50. Can you drink alcohol while breastfeeding ?

Ans. Generally, moderate alcohol consumption by a breastfeeding mother (up to 1 standard drink per day) is not known to be harmful to the infant, especially if the mother waits at least 2 hours after a single drink before nursing. But it is always recommended not to consume alcohol for children’s safety.