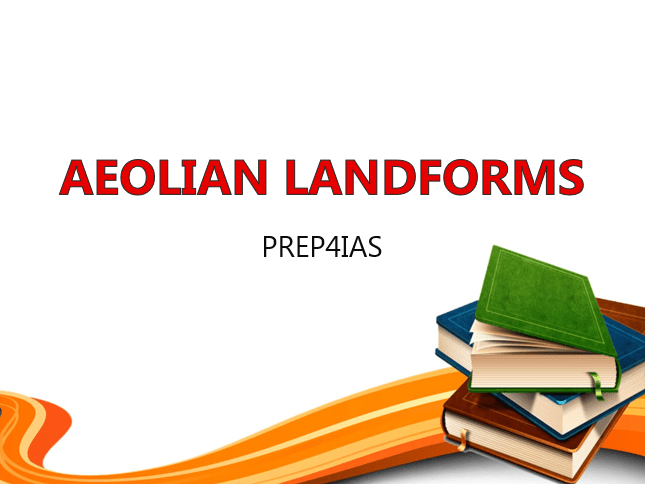 2. Where is the largest erg of the World ?

3. Where is Qattara Depression located ?

Ans. It is wind-blown deposit of fine silt and dust.

5. What is the Rainfall criteria for an area to become Semi-Arid Region ?

6. What are the different types of Deserts ?

7. What is responsible for yellow colour of Hwang Ho ?

Ans. The Loess of china gets eroded by running water and suspended in Hwang Ho to form yellow colour.

8. What are the different sources of Loess ?

9. Where is the largest known deposit of Loess located ?

Ans. Stony Desert in Algeria is known as Reg.

Ans. Stony Desert in Libya and Egypt is known as Serir.

12. What is Sandy Desert called in Turkmenistan ?

13. Who postulated the theoretical Cycle of Arid Erosion ?

Ans. A gentle slope running down from mountain to an internal basin.

16. Which is the Famous Playa in Tarim Basin ?

17. Which are the aeolian landforms usually forms due to Fluvial Action in Desert ?

Ans. A longitudinal Sand dune shape like a sword.

19. Where is the biggest Yardang of the world located ?

Ans. Dunes are large pile of depositional landforms formed mainly from blowing wind over a period of time.

21. Which type of Dunes are mainly formed from Wind Activities ?

Ans. It a dune formed from low sediment supply in the regions where wind blows in one primary direction. More on Aeolian Landforms.

Ans. These are small ridges of sediments that formed due to blowing of wind or water over loose sediments in either a current or wave pattern.

24. Give an example of Ripple Marks Landforms ?

Ans. Wind ripples on aragonite sand from San Salvador Island in the Bahamas.

26. Give an example of Desert Varnish ?

27. What is the another name of Desert Pavement in Australia ?

28. Can a Varnish forms on a Limestone ?

29. Why a Varnish cannot form on a Limestone Rock ?

Ans. It is because limestone is too water soluble and hence does not provide a stable surface for varnish to form.

30. Where does Loess tend to develop ?

Ans. It tends to develop in very rich and productive soils.