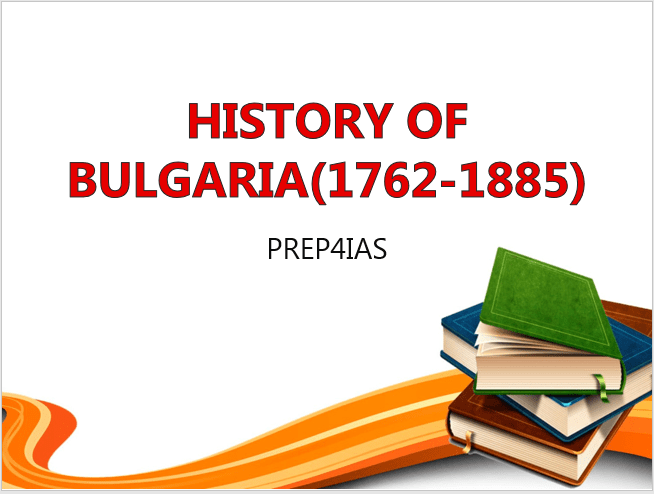 In this tutorial, I will take you through the history of Bulgaria which plays an important role in World’s History. Historically, Bulgars were the ancient Turkic semi-nomadic warrior tribes that flourished in the region of Caspian and Volga region. Subsequently, in 632 AD Bulgars formed an Independent state north of the Black Sea which became the Great Bulgarian State. We will see all the important questions related to Bulgaria which can be asked in your exams as part of World History.

2. Who translated Bible into Bulgarian Language ?

3. Who was elected as Prince of newly formed Bulgarian State ?

Ans. He was the favorite Nephew of Russian Tsar.

5. Who was elected as Prince by the Bulgarian Assembly in 1887 ?

Ans. To work for an autonomous Macedonia.

8. When was Stambulov murdered by Macedonian revolutionaries ?

9. When did Prince Ferdinand recognized by Russia and Other Powers ?

10. When did Ferdinand assumed the title of Tsar ?

11. Why Russians were protesting violently in 1885 during revolution at Philippopolis ?

Ans. It is because Alexander was in favor of Union of Eastern Roumelia with Bulgaria.

Ans. It is because he restored the Constitution of 1879. More on A Brief History of Bulgaria

13. When did Macedonian King Ameyntus I surrendered his country to Persians ?

14. Which Commander was left by Darius in Europe to complete the conquest in the Balkans ?

15. When did Celtic Tribes Clashed with the forces of Macedonian King Cassander in Mount Haemos ?

16. When did Comontorius attacked and conquered Thrace ?

17. When did Romans first Invaded Thrace ?

18. When was the first Christian Monastery founded in Europe ?

19. Who founded the first Christian Monastery in Europe ?

20. Who was the main worship deity of Bulgars ?

Ans. Tengri is considered to be the chief god who created all the things.

21. Who brought Tengri as the chief worship deity in Eastern Europe ?

22. Which of the three largest Bulgar Tribes were united by Khan Kubrat in 632 AD ?

23. What was the Capital of Great Bulgaria ?

24. When did Kubrat signed a peace treaty with emperor Heraclius of the Byzantine Empire ?

25. Who is known as the first Bulgarian Ruler ?

26. When did Khan Krum occupied the territory of Adrianople ?

27. In which battle Kaloyan defeated the forces of the Latin Empire ?

28. Who entitled himself “In Christ the Lord faithful Tsar and autocrat of the Bulgarians, son of the old Asen” in an Inscription ?

30. When did the Bulgarian revolted in the April Uprising ?

31. When did Russian declared war on Ottomans for the Liberation of Bulgaria ?

32. Which event led to the Constantinople Conference of the Great Powers in 1876–77 ?

33. When did Serbia attacked Bulgaria ?

34. By when Bulgaria was completely subjugated by the Ottoman Empire ?

35. Which was the initial Permanent capital of First Bulgarian Empire ?