In this tutorial, I will take you through important questions and answers from the Papacy time period which played a huge role in World History. The Origin of Papacy is closely linked to Saint Peter during the onset of first century. Although papacy had its origin since Jesus but the temporal power only came during the reign of Constantine. Since then Cathedral Church and Pope became the Centre of Christianity all around the world till this day. Hence it is utmost important for us to know about the role of papacy played in the World History. We will see various questions and answers related to this topic in below sections. 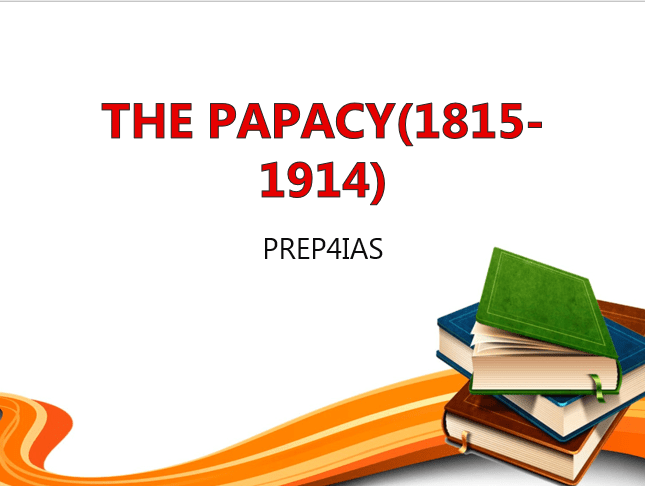 1. Under whom the Jesuit Order and the Inquisition were re-established in Rome ?

2. Where did the discontent against the Rule of Priests centered ?

3. Who prosecuted the leaders in 1821 after rising in Naples ?

4. What was the chief activity of the papacy under Pius VII ?

Ans. To recover its International influence in Europe.

Ans. Cardinal Consalvi(1757-1824), was the secretary of state under Pius VII. More on History of the Papacy.

6. By whose efforts Pope obtained the restitution of the states of the church from Congress of Vienna ?

8. Who are known to glorify the Catholic Church and the authority of the pope ?

10. Under which Pope, revolts were suppressed ?

11. Who was known as the Pope of Poor and Humble ?

12. Who was appointed as arbitrator in a dispute between Germany and Spain Over the Possession of Caroline Islands?

13. Who was called traitor due to his neutrality against the war with Austria in 1848 ?

15. When did the construction of “Basilica of Constantine” Started ?

16. What was the use of the famous 8th Century Forgery – “Donation of Constantine” ?

Ans. It was used to place the Pope in Central Figure of Constantine Christianity. More on History of Papacy.

17. Who presided over the first council of Nicaea ?

19. When did Constantine moved the Capital of Roman Empire from Rome to Byzantium ?

20. When was the first Papal election took place without the existence of a Western Roman Emperor ?

21. When was the Era of Byzantine Papacy ?

22. When did all the Papal States incorporated into the Kingdom of Italy ?

24. Which period is known as the “Nadir of the Papacy” as per historian Will Durant ?

Ans. It is due to the reason that in this period pope was controlled by the powerful and corrupt aristocratic family, Theophylacti, and their relatives.

26. When did Italy became a constituent kingdom of the Holy Roman Empire ?

27. Which Roman Emperor deposed all three rival popes and installed Pope Clement II when he reached Rome in 1048 AD ?

28. Which Period is known as the period of conflict between Pope and Holy Roman Emperor in the History of Papacy ?

30. Which pope was known as “the Warrior Pope” for his use of bloodshed to increase the territory and property of the papacy ?

31. Which Pope diplomatic and military campaign resulted the sack of Rome in 1527 ?

32. As a result of which treaty Vatican City was established on 1929 ?

33. What was the period for Ostrogothic Papacy ?

34. Who has ended the Ostrogothic Influence from Rome ?