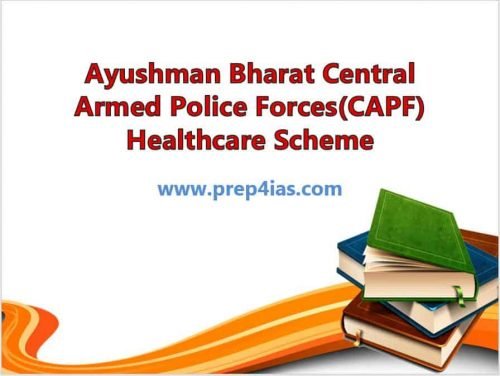 Union Home Minister Amit Shah launched Ayushman Bharat CAPF on 23rd January 2021 for personnel and dependents of the Central Armed Police Forces. It is a joint initiative by the Ministry of Home Affairs and the National Health Authority. The Scheme is a part of the Ayushman Bharat Scheme which delivers the medical benefit of up to Rs 5 lakh per family covering nearly 50 crore beneficiaries.

The Scheme launched in January 2021 was first only applicable to the state of Assam. The Union government then decided that the CAPF scheme would be launched across the country in May 2021, thereby extending its applicability to Central Armed Police Forces (CAPF) officials and serving personnel and their dependents from seven forces; Assam Rifles, Border Security Force (BSF), Sashastra Seema Bal (SSB), Central Reserve Police Force (CRPF), Central Industrial Security Force (CISF), National Security Guard (NSG), and Indo-Tibetan Border Police (ITBP).

The Union Home Minister addressed the need for this Scheme by stating that armed personnel serving the country require health security for their families. At the same time, they do their service at different locations in the country.

The healthcare services to CAPF personnel on the PM-JAY IT platform will help the CAPF Bravehearts, and their families availing complete paperless and cashless services across 24,000 plus empanelled hospitals in a phased manner. The reimbursement process in emergency services in non-empanelled hospitals has also been made easy.

One of the main objectives of the Scheme is to provide CAPF personnel and their dependents with cashless health services by using the Ayushman Bharat PM-JAY IT platform. The health care given to the person will provide them with a cover of Rs5 lakh per family.

In addition to going paperless, this Scheme will provide a 24x7 call centre, online grievance management system, fraud and abuse control, and a real-time monitoring dashboard. The CAPF personnel will have access to the public as well as private hospitals.

The process for availing of cashless benefits is that the beneficiary will collect an Ayushman CAPF e-card provided by their respective forces. The card activation may be done through an empanelled private hospital using a copy of the ID proof from the force, and an Aadhaar or Government approved photo ID. The Pradhan Mantri Aarogya Mitra (PMAM) stationed at PM-JAY empanelled private hospital provides an alternate method of obtaining the e-card. The CAPF card will not change even if the personnel is transferred to another state. In cases of deputation to another force and the force ID is changed, a new Ayushman CAPF card is issued. Previous Ayushman CAPF card will get disabled.

Beneficiary verification for Pradhan Mantri Arogya Mitra (PMAM) is done in the empanelled healthcare organisation. For the one-time e-KYC or beneficiary identification process, a copy of the Force/Dependent ID and any Government approved ID must be submitted by the Serving CAPF personnel or their dependent. The beneficiary requires a referral by any CAPF Hospital / Government Hospital to activate the Ayushman CAPF card to avail of cashless healthcare services.

How does it affect the Indian Economy

The Union Budget allocated Rs1,02,686 crore to CAPF for 2022-23, which is an increase of 12.98%, and the Home Minister stated that the budget of the Scheme would be catered to through this allocated budget. The Ministry of Defence has the highest allocation of the budget, followed by Consumer Affairs, Food and Public Distribution, Road Transport and Highways, and Home Affairs.

It is also expected that income tax collection will increase by 14% for 2022-23. This portrays an incomplete picture of the status of the economy given that the Scheme is to provide healthcare, but the budget allocation to the Ministry of Health and Family Welfare has only increased by 0.2%.

The CAPF scheme launched with the intention of providing healthcare benefits to CAPF personnel and their family is also a unique initiative which is incorporating a robust IT framework, accessing networks of various private hospitals and portability services across the country.

The existing guidelines provide for the personnel to avail free of cost medical facility at CAPF or a Government-owned facility, or they can go to empaneled private hospitals. This provides the CAPF personnel with the opportunity to get similar benefits as the CGHS card provides or the State health services scheme card but with the added benefit of using the same pan India.

One issue which should be dealt with first is the situation of public health service in the country, the uneven distribution of human resources and vacant positions for health workers. If this is not addressed, then the goal of the Scheme would be unsustainable since even though the personnel will have the government benefit but no means to put it to use.