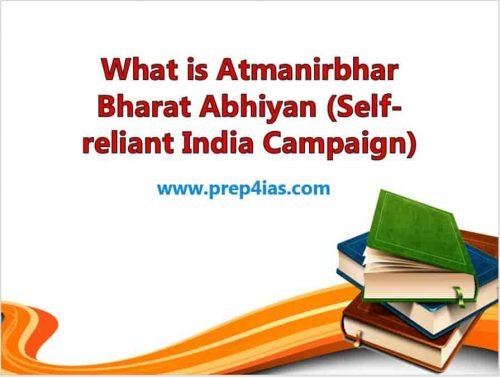 Atmanirbhar Bharat Abhiyan is the concept of self-reliance, was introduced by the Hon'ble Prime Minister Shri Narendra Modi in the wake of the Covid-19 Pandemic which was the worst crisis, the world is facing in the 21st century. The program was launched on 12th May 2020 and under it, various economic packages were introduced. Under this scheme, the government shelled out INR 20 lakh crores which is equal to 10% of India's GDP, a stimulus package to help recover the economy by promoting incentives for domestic production. The main aim and objective of the ‘Self-reliant India’ (Atmanirbhar Bharat Abhiyan) are as follows :-

The vision and aim of this program were initially to fight the Covid-19 pandemic in India but later it was broadened to make the country and its citizens independent and self-reliant in all senses. It encompasses themes such as “Local for Global”, “Make in India for the World” and “Vocal for Local”. Economy, infrastructure, technology, demography and demand are the five pillars of Atmanirbhar Bharat Abhiyan. More on PIB.

The Atmanirbhar Bharat stimulus package announced by the government consists of the following five tranches:-

The MSMEs and other small businesses were provided various incentives.

a) Collateral-free Automatic Loans for Businesses, and MSMEs

Small businesses and MSMEs were given an "Emergency Credit Line" from the financial institutions, which was up to 20% of the entire outstanding credit. To become eligible under this scheme, the borrowers have to have Rs 25 crore of the outstanding loan and a minimum of Rs.100 crore of turnover. The minimum tenor of the loan has to be 4 years. The interest was capped with a 12-month moratorium given for principal repayment. The scheme was valid till 31st October 2020.

b) Subordinate Debt for stressed MSMEs

To give equity support to stressed MSMEs, the government had provided Rs20,000 crores as subordinate debt. Only NPA and stressed MSMEs were eligible for this scheme, it was estimated that around 2 lakh MSMEs would benefit from this scheme. Under this scheme the banks would be getting Rs.4,000 crore credit guarantee support from CGTMSE.

The government focused on reducing the threshold for MSMEs. The revised classification of MSMEs gave composite criteria and changed the criteria from investment in plant & Machinery or Equipment to Composite Investment and annual turnover. The following table shows the previous and revised MSME classification.

The government of India provided direct support to the rural economy by providing a 3-month loan moratorium upon Rs. 4.22 lakhs crore on agricultural loan by which 3 crore farmers benefitted. Also, a total of 25 lakhs Kisan credit cards were issued with a total limit reached up to Rs. 25,000 crores.

b) Migrant and urban poor support

The state government was allowed to use State Disaster Response Fund (SDRF) which was utilized in the provision of food, water and shelter to the interstate migrant. With Rs. 11002 crore central government contributed towards SDRF.

Migrants who returned to rural areas from urban areas due to the lockdown were supported by The Mahatma Gandhi National. Rural Employment Guarantee Act 2005 MGNREGS.

NABARD to provide Rs30,000 crore Additional Emergency Working Capital for farmers, this was above the existing aid given by the centre and will benefit approximately 3 crore farmers. Rs18,700 crores were utilized towards the "PM KISAN fund" and up to Rs6,400 crores were paid for "PM Fasal Bima Yojana".

The government budgeted Rs1 lakh crore to strengthen Agri infrastructure by forming the "Agri Infrastructure Fund". The fund shall be utilized towards the improvement of agriculture infrastructure such as the establishment of cold chain facilities, and the building of Post-Harvest Management infrastructure.

a) Aircraft and space

As a policy reform, the government has opened the way for commercial coal mining to reduce import dependence and this will enhance the self-reliance of India in coal production. The private sector participation is through the revenue-sharing model. Partially explored coal blocks are also auctioned. The government also plans to provide a rebate in the revenue-sharing model in case the company opt for coal gasification. In recent years the government has planned to liberalize the coal sector by providing Coal Bed Methane (CBM) extraction rights through auction. Further, government is taking various measures in the coal sector via ease of doing business measures.

a) Ease of Doing Business reform

Before coming to the shortfall of Atmanirbhar Bharat Abhiyan, it is important to go through two success stories of the Abhiyan, which are mentioned below:-

Following are the criticism by the critics of Atmanirbhar Bharat Abhiyan:-

Atmanirbhar Bharat Abhiyan gave more emphasis towards the supply side to boost the economy by infusing capital. While the MNREGA got additional financing to help generate employment for the migrant workers, who migrated back to the villages due to the lockdown. Many of the reform initiatives, such as expanding the number of sectors open to private investment and encouraging foreign direct investment, should not be viewed as short-term COVID alleviation but rather as long-term structural improvements. These actions' results will need to be closely monitored.