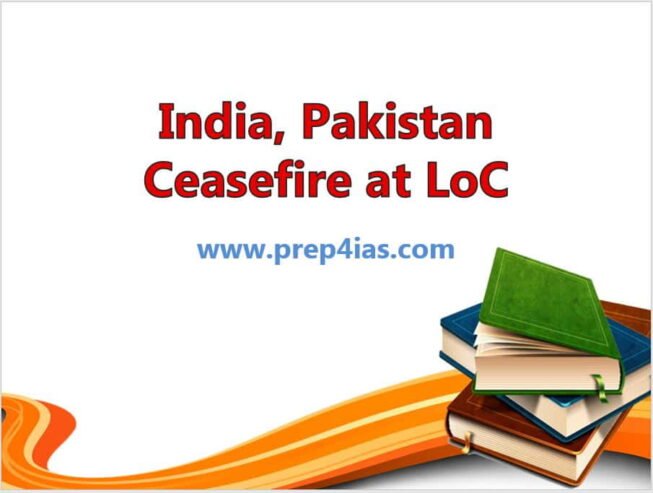 In this article, we will look into the recently agreed peace agreement between India and Pakistan to establish Ceasefire at LOC. In the Interest of achieving mutual beneficial and sustainable peace along the borders, DGMOs of India and Pakistan held discussions to review the situation and work together.

What is LoC(Line of Control)

It is marked as a boundary separating the parts of Indian Union Territory(UT) of Jammu and Kashmir and the parts of region iIlegally occupied by Pakistan. The length of LoC is around 740 kilometers.

History of LoC(Line of Control)

After the partition of India, there was an immediate war fought between the Country of India and Pakistan in 1947 which finally ended with the establishment of UN Ceasefire Line of 1949. This Line was later declared as the Line of Control after the Shimla Agreement of 1972. Both of the countries agreed to make it as a de facto border that should not be violated by armed action. 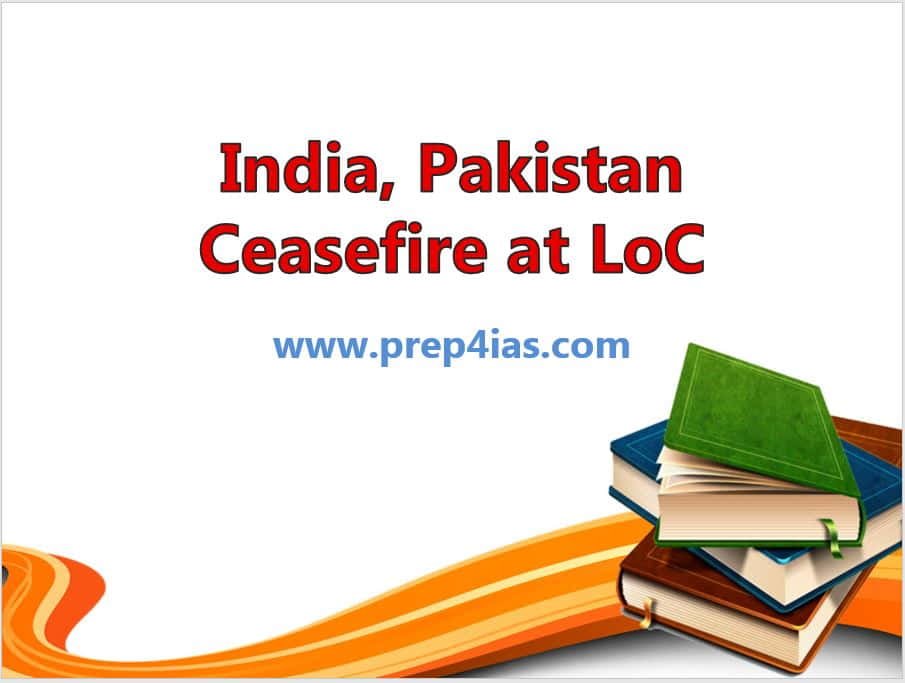 The Director Generals of Military Operations of India and Pakistan held discussions and reviewed the situation along the LoC. Both sides agreed for strict observance of all agreements, cease firing along the LoC and all other sectors with effect from midnight 24/25 Feb.

Difference between International Boundary and Line of Control(LoC)

The UN Security Council adopted resolution 39 on January 1948, establishing the United Nations Commission for India and Pakistan (UNCIP) to investigate and mediate the dispute. In the next step, the Security Council decided to enlarge the membership of UNCIP using its resolution 47 on April 1948 and recommended various measures including the use of observers to stop the fighting. At the recommendation of UNCIP, the Secretary-General appointed the Military Adviser to support the Commission on military aspects and provided for a group of military observers to assist him.

The first team of unarmed military observers, which eventually formed the nucleus of the United Nations Military Observer Group in India and Pakistan (UNMOGIP), arrived in the mission area in January 1949 to supervise, in the State of Jammu and Kashmir, the ceasefire between India and Pakistan and to assist the Military Adviser to UNCIP. The tasks of the observers, as defined by the Military Adviser, were to accompany the local authorities in their investigations, gather as much information as possible, and report as completely, accurately and impartially as possible. Any direct intervention by the observers between the opposing parties or any interference in the armies’ orders was to be avoided. More on UNMOGIP Official website.

Ceasefire Violations by Pakistan in 2020

As per HT Report “There were 5,100 instances of ceasefire violation by Pakistan along the Line of Control (LoC) in 2020 in Jammu and Kashmir, the highest in nearly 18 years, that claimed 36 lives and left more than 130 people injured”.

Impact of Abrogation of Article 370

Out of total 3,289 ceasefire violations by the Pakistan army along the Indo-Pak border in 2019, there were 1,565 ceasefire violations took place since August 2019, after the Indian government abrogated Article 370 that gave special status to Jammu and Kashmir and bifurcated the erstwhile state into union territories. More on HT News.

It has been observed that both the countries signed many ceasefire agreements in the Past but it only lasted for 6-7 months and then again same situation arises. While it remains interesting to see what happens next but as of now both countries are trying to ease the situation on the border.