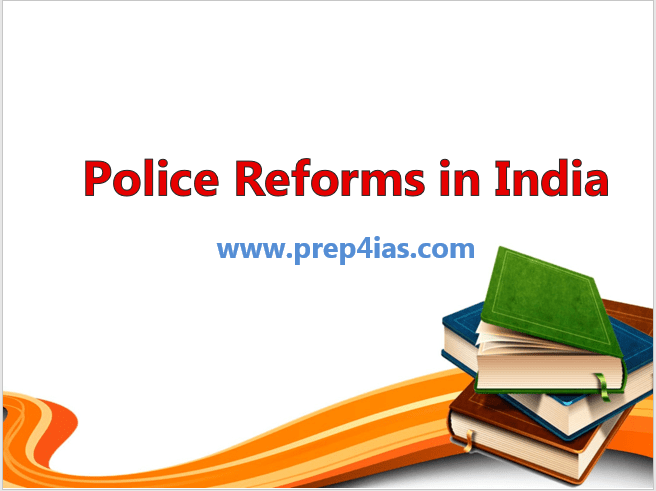 In this session, we will look into the important points on Police Reforms in India. The fact that the Police Act of 1861 had failed to produce an efficient and a professional police force had been realized even by the British. A major effort to improve the system was made in 1902, the very beginning of the last century, when the Government appointed a Commission under the Chairmanship of Sir A.H.L. Fraser to examine the system and suggest changes.

The Commission made many recommendations but either failed to recognize or conveniently ignored the fact that most of the ills afflicting the organization could be ascribed to the system established by the Police Act of 1861 and the philosophy of policing that was prescribed. The colonial system of policing established by the Act thus continued to remain in existence. More on Supreme Court Case on Police Reforms.

Police Reforms in India(Recommendations of the Committees and Commissions)

Police is an exclusive subject under the State List ( List II, Schedule 7 of the Indian Constitution). States can enact any law on the subject of police. But most of the states are following the archaic Indian Police Act 1861 with a few modifications. Police have become the ‘subjects’ of Parliamentarians and legislators – with a high degree of politicization and allegiance towards ruling party.

The Second Administrative Reforms Commission and the Supreme Court have observed that there is a need to have an independent complaints authority to inquire into cases of police misconduct. This may be because the political executive and internal police oversight mechanisms may favor law enforcement authorities, and not be able to form an independent and critical judgement.

On 22-9-2006, the Supreme Court of India delivered a historic judgment in Prakash Singh v. Union of India instructing the Central and State Governments to comply with a set of seven directives laying down practical
mechanisms to kick-start police reform. The Court’s directives seek to achieve two main objectives: functional autonomy for the police through security of tenure, streamlined appointment and transfer processes, and the creation of a buffer body between the police and the Government and enhanced police accountability, both for organizational performance and individual misconduct.

After decades of public pressure, lack of political will and continued poor policing, a police reform process is finally budding. The need for reform is particularly acute as the archaic Police Act of 1861 continues to govern policing, despite far reaching changes in governance.

Committees and Commissions For Police Reforms

The advent of Independence changed the political system, but the police system remained more or less unaltered.
However, the need for change and reform in the police had been realized widely. Throughout the 1960s, many State
Governments took initiatives to set up commissions to examine the problems of the police and suggest improvements. During the 1970s, the Government of India became active and set up the Committee on Police Training in 1971, and later the National Police Commission in 1977.

The failure of these initiatives to usher in reforms was mainly due to lack of action by the Government in implementing the recommendations of the expert commissions and committees. This led to efforts from non governmental actors in the 1990s to pressurize the Government to consider and implement the recommendations of the expert bodies. The following major initiatives have been:

The Second Administrative Reforms Commission and the Supreme Court have observed that there is a need to have an independent complaints authority to inquire into cases of police misconduct. This may be because the political executive and internal police oversight mechanisms may favor law enforcement authorities, and not be able to form an independent and critical judgement.

For example, the United Kingdom has an Independent Office for Police Conduct, comprising of a Director General appointed by the crown, and six other members appointed by the executive and the existing members, to oversee complaints made against police officers. Another example is that of the New York City Police which has a Civilian Complaint Review Board comprising of civilians appointed by local government bodies and the police commissioner to investigate into cases of police misconduct.

India has some independent authorities that have the power to examine specific kinds of misconduct. For example, the National or State Human Rights Commission may be approached in case of human rights violations, or the state Lokayukta may be approached with a complaint of corruption. More on PRS India.

However, the Second Administrative Reforms Commission has noted the absence of independent oversight authorities that specialize in addressing all kinds of police misconduct, and are easily accessible.

The central government set up the Police Act Drafting Committee  in 2005 to draft a new model police law that could replace the Police Act, 1861. The committee submitted the Model Police Act in 2006, which was circulated to all the states in 2006. 17 states (Assam, Bihar, Chhattisgarh, Gujarat, Haryana, Himachal Pradesh, Karnataka, Kerala, Maharashtra, Meghalaya, Mizoram, Punjab, Rajasthan, Sikkim, Tamil Nadu, Tripura, Uttarakhand) passed new laws or amended their existing laws in light of this new model law.

The Model Police Act requires state authorities to have five members: a retired High Court Judge, a retired police officer of the rank of DGP from another state cadre, a retired officer with public administration experience from another state, a civil society member and a person with at least 10 years of experience as a judicial officer or lawyer or legal academic. It also requires district level authorities to have retired judges, police officers, practicing lawyers, etc.