In this article, we will discuss about another Indian government scheme called Pradhan Mantri Awas Yojana (PMAY). The Indian government created housing facilities for slum dwellers through the Housing for All scheme. The Ministry of Housing and Alleviation of Urban Poverty in India introduced it. Additionally called the Pradhan Mantri Awas Yojana. For those who meet the requirements, it is available to both urban and rural residents.

The government programme Pradhan Mantri Awas Yojana (PMAY), which strives to provide affordable housing for everyone, has as its goal the construction of 20 million such homes by the end of March 2022. On June 1st, 2015, the Pradhan Mantri Awas Yojana, or "Housing for All," was introduced. In accordance with this plan, low-cost, environmentally friendly homes will be constructed in urban areas for the impoverished people who live there. A similar programme was then introduced in 2016 for the rural populace with the aim of providing shelter for everyone by 2022.

The Pradhan Mantri Awas Yojana-Urban (PMAY-U) is a flagship mission of the Indian government being carried out by the Ministry of Housing and Urban Affairs (MoHUA). The Mission seeks to alleviate the lack of urban housing among EWS/LIG and MIG categories, including slum dwellers, by guaranteeing a pucca house to all qualified urban households by 2022, by then the country would have achieved 75 years of independence.

By allowing female members or joint members to own homes, the Mission supports women's empowerment. Additionally, people with disabilities, the elderly, SC, ST, OBC, minority groups, single women, transgender people, and other weaker & more vulnerable groups in society are given preference. The recipients of a Pradhan Mantri Awas Yojana(U) house are guaranteed a decent standard of living, as well as a sense of security and pride in their home.

PMAY(U) utilizes a cafeteria approach to fit the demands of individuals depending on geographical factors, topography, economic situations, availability of land, infrastructure etc.

Components of PMAY (U)

All dwellings constructed are eligible slum residents under the ISSR component using land as a resource with the involvement of private developers are eligible for central assistance of Rs. 1 lakh per house. The rules suggest that the State/UT Government de-notify slums after rebuilding. States and cities are allowed the freedom to use this central assistance for the redevelopment of additional slums.

To ensure that projects are financially sustainable, states and cities contribute more FSI, FAR, or TDR. States and cities grant additional FSI/FAR or TDR to landowners for slums on privately owned land in accordance with their policies. In this situation, no Central Assistance is permitted.

In order to distribute this subsidy to the beneficiaries through lending institutions and to track the progress, the Ministry has designated the Housing and Urban Development Corporation (HUDCO), National Housing Bank (NHB), and State Bank of India (SBI) as Central Nodal Agencies (CNAs). 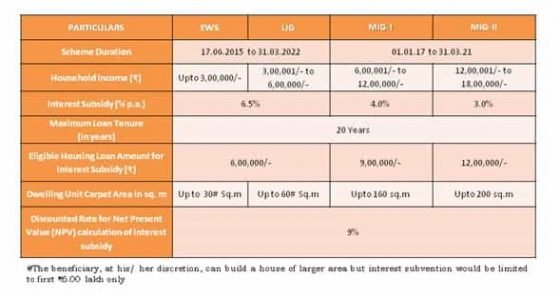 The Indian government offers Central Assistance under AHP in the amount of Rs. 1.5 lakh every EWS dwelling. A project for affordable housing may include a mix of homes for various income levels, but it will only be qualified for Central Assistance if at least 35% of the project's homes fall under the EWS category.

With the intention of making EWS homes inexpensive and accessible to the intended beneficiaries, the States/UTs decide on an upper limit on the sale price of EWS homes. Other incentives are also offered by the state and localities, including their state share, inexpensive land, stamp duty exemption, etc.

Eligible households from EWS categories are given central assistance up to Rs. 1.5 lakh per EWS dwelling for home building or improvement. In order to determine land ownership and other information like economic situation and eligibility, the Urban Local Bodies validate the building plan and information that the beneficiary has provided.

Direct Benefit Transfer (DBT) is a method used by States/UTs to distribute Central Assistance to beneficiaries' bank accounts along with any applicable State/UT/ULB share.

Beneficiaries to the scheme

Scope of the scheme

The rural housing programme Indira Awas Yojana was updated, and Pradhan Mantri Awas Yojana(G) was launched on November 20, 2016, in order to meet the objective of Housing for All by 2022. This programme offers financial support for the construction of pucca houses for all homeless households and rural households residing in run-down structures. By 2022, the government hopes to have constructed 4 crore pucca dwellings under this programme.

In plain areas, the cost of unit assistance is split 60:40 between the Central and State Governments, and 90:10 in northeastern and hilly states.

I) Based on Definition, Beneficiaries and Area Restrictions

II) Based on No. of planned houses, selection, fund allocation and home sizes

Challenges under the PMAY scheme

A home is a basic need shared by all. But for many Indians, owning or living in a decent house remains a distant dream. The political desire to resolve this problem is significantly more crucial than any other factor preventing the dream from coming true. The objective of the PMAY must be realized by filling up the gaps left by the combined efforts of the public and private sectors.