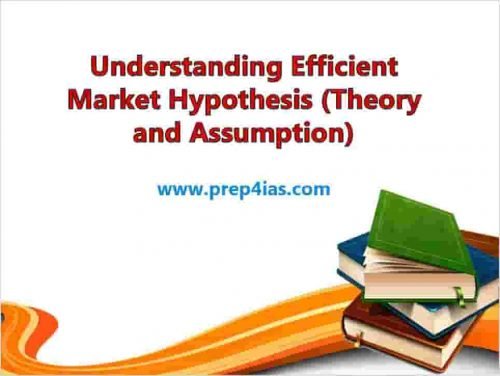 The efficient market hypothesis is a very famous theory used in financial economics. This theory reflects the importance of the buyer and seller relationship. Over the years this theory has received criticism and there have been instances when the theory proved wrong. In this article, we shall discuss some important aspects of this hypothesis and will discuss it in detail. But the first question that arises is what even is an efficient market hypothesis and what does it state ?

What is an Efficient Market Hypothesis ?

The efficient market hypothesis also known as the efficient market theory states that the prices of all assets reflect complete and accurate information about them. This theory is used in financial economics. The main implication of this hypothesis is that picking out stocks, and timing the market to outperform and to beat the market is very much impossible unless someone has insider knowledge and is an outlier. Being an outlier can prove to be highly fortunate or unfortunate.

People who support the theory of efficient market generally state that due to the randomness of the market, an investor can get better returns if they invest at a low cost and by maximizing diversification. According to one research conducted by Morningstar Inc., the returns of active managers have been compared by a compound made from all the related index and exchange trade funds. The result of this study supported the efficient market hypothesis. The research found that only 23% of the active managers managed to do better than their passive contemporaries over the period of 10 years. The success rate was higher for foreign equity and bond funds.

In short, investors have more benefits if they invest in various stocks and expand their portfolio rather than buying multiple stocks of a single firm. But still, there are some active managers who still outperform passive funds but the main challenge that arises for investors is to determine which ones will be successful in doing so in the long run. Only 25% of active managers have the chance to outperform their passive manager peers in the longer term.

What are Efficient Markets ?

In this case, buyers are more hesitant to buy the asset and to determine its actual price of it. So due to this problem, the assets can be overpriced or underpriced. Sometimes this problem also exists due to the lack of participants in the market, higher rate of transactions, human psychology, and emotions. Although all the markets are somewhat inefficient if this problem increases it can cause the market to fail. Hence, accepting the theory of an efficient market is difficult. Therefore, there have been modifications in this theory over the years to make it more relevant. Some of the modified versions of the efficient market hypothesis are:-

a) Semi-strong efficiency of the market

This version of the efficient market theory implies that all public information regarding a stock impacts the price of the stock. But the private information is not calculated. Hence, no analysis can be used by the investors to gain additional profits.

b) Weak efficiency of the market

This form of efficient market hypothesis states that the price of the stock is a reflection of all of its past prices. Hence, the investors cannot still conduct any sort of analysis to gain additional returns.

Although this hypothesis holds crucial importance in the field of financial economics, this theory has also been criticized a lot. Market experts believe that finding undervalued stocks or trying to determine the trend of the market through technical or statistical analysis does no good. According to experts, both technical and analytical analysis cannot determine excess returns adjusted for risks and ultimately, it is only insider information that can result in outsized returns adjusted for risks.

Even though there are a lot of practical examples that support the efficient market hypothesis but there is also some evidence that negates this theory. A very big example of this is one of the top investors in the world, Warren Buffet who has been continuously beating the market over the last few years, which is something that has been declared impossible by the efficient market theory.

Some people also argue against this theory using the example of the 1987 market crash. When the stocks of Dow Jones industrial average fell by almost 20% in only a single day. Similarly, asset bubbles are also a factor that proves that stocks are not always fairly priced in the stock market.

The efficient market hypothesis is a very important theory in financial economics. This theory empathizes on the importance of transparency in the market between buyers and sellers. The more participants there would be in a market, the more efficient it will become. Although, there is evidence that supports this theory modern researchers believe that this theory cannot be accepted in its purest form as inefficiencies exist in every market.