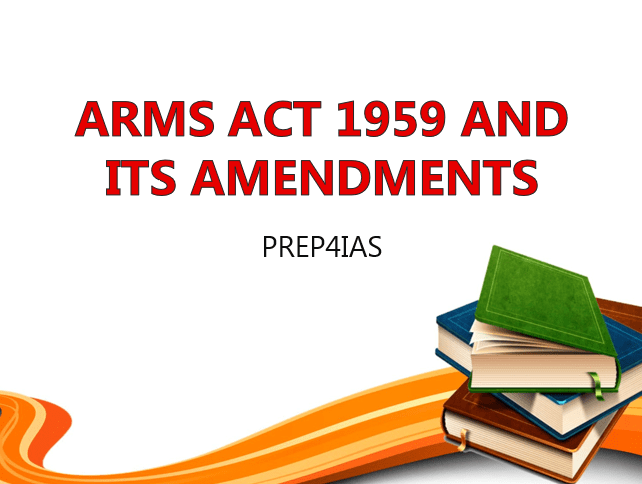 In this Session, I will take you through Important Sections and amendments of Arms Act 1959. The main purpose of bringing this act was to regulate the purchase of Arms and Ammunitions, curb the illegal trade of arms and ammunitions and stop the violence arising from them. We will look into all important questions from Arms Act 1959 which can be asked in your Exams.

1. Which Section forbids the manufacture, sale, and use of prohibited arms and ammunition unless it has been specially authorized by the central government ?

2. Which Section prescribes that any contravention of Section 7 that results in the death of any person ‘shall be punishable with death’ ?

Ans. To provide for enhanced punishments in the context of escalating terrorist and anti-national activities.

4. Which Section gives power to Convicting court to Confiscate for any arms or ammunition ?

5. Under which Section Police Officer or any other officer empowered by the Central Government can demand production of License from any Person carrying firearms ?

6. Under which Section, Magistrate has power to search and seizure of Firearms and Ammunitions ?

7. Which rule were quietly notified by the Ministry of Home Affairs, Government of India to substantially change the legal position of gun ownership in India ?

Also Read: Important Questions of Article 32 of Indian Constitution and Its Similarity with Article 226

10. Which Section provides the provisions to make all arrest and searches based on Code of Criminal Procedure, 1973 ?

11. Under which Section a person cannot shorten the barrel of a firearm or convert an imitation firearm into a firearm unless he holds in this behalf a licence ?

Ans. It means anything which has the appearance of being a firearm, whether it is capable of discharging any shot, bullet or other missile or not.

13. Under which Section, one cannot sale or purchase firearm which does not have any Identification Marks ?

14. Which Section talks about the Minimum Age of Acquisition or Possession of Firearm ?

15. What is the Minimum Age required for the Acquisition and Possession of Firearm ?

16. Which Section prohibits the Import and Export of Arms without valid License ?

17. Under which Section of Arms Act 1959, Firearms License are granted ?

18. Under which Section of Arms Act 1959, Firearms License are refused ?

19. Under which Section a Person can appeal against the License Authority for Refusal of granting License ?

20. Under which Section Central Government can order the seize of Arms and Ammunitions possessed by any Person ?

Hopefully, you have liked this article on Arms Act, 1959 and Its Amendments. Please let me know your feedback on Comment Box.