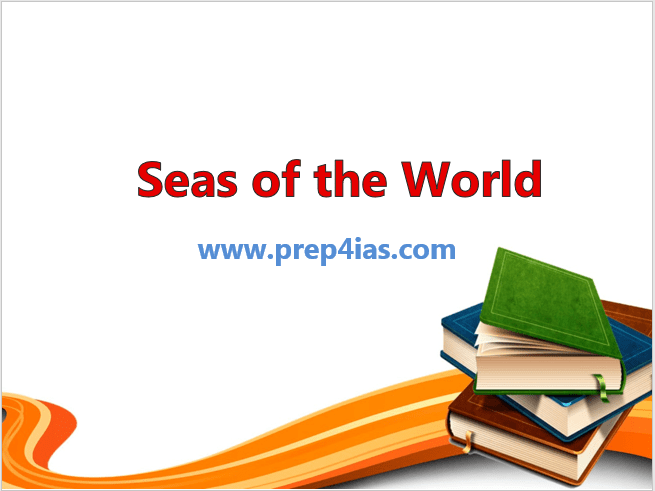 In this session, we will go through seas of the world. Water covers almost 71% of the entire planet and in that 96.5% are covered by Oceans. Seas are basically smaller part of Oceans. There are more than 80 big seas present around the globe. Usually seas are found on the margins of Oceans and are partially enclosed by land.

You might have seen people using Ocean and Sea word interchangeably but there are five accepted oceans and rest of the water bodies whose size is lesser than the Oceans are in the form of seas. Every year you will see atleast one question related to seas of the world in your exams hence it is important to go through the seas of the world.

Important Questions on Seas of the World

1. Which Sea connects Spain to Morocco in Mediterranean Sea ?

3. Which Sea Connects Italy to Corsica ?

4. Which Sea Connects Greece from Turkey ?

5. Which is the Shallowest Sea of the World ?

6. In which sea Novy Port and Dikson port are located ?

7. Which is the Principal port on Chukchi Sea in Russia ?

8. Which Sea is bounded on the west by the Long Strait, off Wrangel Island, and in the east by Point Barrow, Alaska, beyond which lies the Beaufort Sea ?

9. Which Sea is separated from the Barents Sea to the west by the Kara Strait and Novaya Zemlya, and the Laptev Sea to the east by the Severnaya Zemlya archipelago ?

10. Which of the seas are the coldest seas on North Pole ?

11. Which of the seas are the coldest seas on South Pole ?

Ans. Weddell and Ross Seas are considered to be coldest on the South Pole.

12. Which sea borders on the Laptev Sea to the west and the Chukchi Sea to the east ?

Also Read: 55 Important Questions on Committees and Commissions in India

13. Which sea is located near Kamchatka Peninsula ?

15. Which sea is located between Japan and Korean Peninsula ?

16. Which sea is located to the southwest of the Philippines island ?

Also Read: Important Questions on Ancient Vedic Civilization (1500 BC – 600 BC)

17. Which sea is located to the south of the Philippines island ?

18. Which Sea is bordered by the Torres Strait and through that the Coral Sea to the east, the Gulf of Carpentaria to the south, the Timor Sea to the west and the Banda and Ceram seas to the northwest ?

19. Which sea is bounded on the north by the island of Celebes and on the south by Sunda Islands of Flores and Sumbawa ?

20. Which of the Seas bordered the Flores Sea ?

Ans. The seas that border the Flores Sea are the Bali Sea (to the west), Java Sea (to the northwest), and the Banda Sea (to the east and northeast). More info on Seas of the World(Flores Sea, Banda Sea.

21. Which of the Islands borders the Banda Sea ?

Ans. It is bordered by Sulawesi to the west, Buru, Ambon Island, Seram, Aru Islands, Barat Daya Islands, to the Tanimbar Islands, the Kai Islands and Timor in the East.

22. In which sea major port of Arkhangelsk of Russia is located ?

23. Which Canal Connects the Baltic Sea and North Sea ?

24. Which Sea in the Arctic Ocean has been controversial over the maritime boundary between Russia and Norway ?

25. Which are the Marginal Seas of Pacific Ocean ?

Ans. Below are the marginal seas of pacific ocean :-

26. Which are the Marginal Seas of Atlantic Ocean ?

Ans. Below are the Marginal seas of Atlantic ocean :-

27. Which are the Marginal Seas of Indian Ocean ?

Ans. Below are the marginal seas of Indian Ocean :-

28. Which are the Marginal Seas of Arctic Ocean ?

Ans. Below are the marginal seas of Arctic Ocean :-

29. Which marginal sea of the Arctic Ocean, located north of the Northwest Territories, the Yukon, and Alaska, and west of Canada’s Arctic islands ?

30. In which sea there is an international boundary dispute going on between Canadian territory of Yukon and the U.S. state of Alaska ?

31. Which Marginal Sea of the North Atlantic Ocean is located between Baffin Island and the west coast of Greenland ?

I hope you liked this article on seas of the world. Please let me know your feedback on the Comment Box.