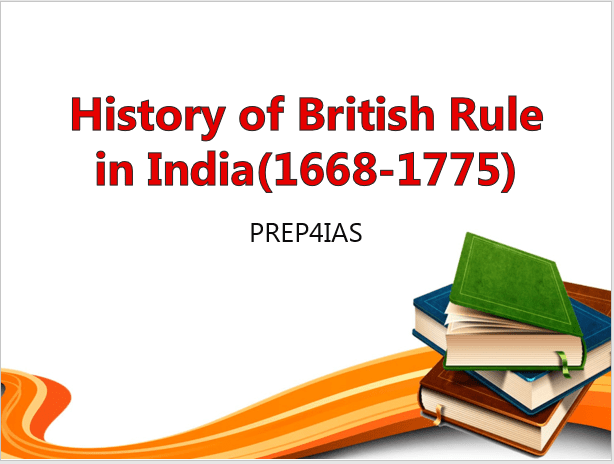 1. Who is considered as the founder of Madras ?

2. Which was the first British Fort Built in India ?

3. Who Established the British First Factory at Hooghly in Bengal ?

4. With whose permission Bridgman first established a English factory in Bengal ?

5. After paying how much annual amount British got the trade privilege in Bengal ?

7. Who is the considered to be the founder of Bombay ?

8. Which place became the major trade center of British in 18th Century after the fall of Surat in 17th Century ?

9. During British era, which places were under the Madras Presidency ?

Ans. Most of the present day Tamil Nadu and Andhra Pradesh along with a few districts and taluks of Karnataka, Kerala and Orissa.

10. Who was the first English Governor of Bengal ?

11. Who established an English Factory in Sutanati in 1691 ?

12. Why British Fortified the region of Sutanaati ?

Ans. Due to the revolt of Burdwan Zamindar Shobha Singh

Ans. After taking the permission of Bengal Subedar Ajimushshan in 1698-99, Company bought the Zamindari of Sutinata,Govindpur and Kalikata for Rs1200 from Zamindar Ibrahim Khan.These three villages were merged and the modern Calcutta was founded in 1699 by Job Charnock.

Ans. Dastak was a letter of order for free trade.

16. When did Farrukhsiar issued a decree to exempt the Company Business in Bengal from Custom Duty in Lieu of Rs 3000 Annual Tax ?

17. After paying how much amount per annum Company business got freed from import-export fee in Surat ?

18. Who was the founder of the State of Bengal ?

19. Who was the founder of the State of Awadh ?

20. Who was the founder of the State of Hyderabad ?

21. Who was the founder of the State of Rohilkhand ?

22. Who was the founder of the State of Mysore ?

24. Who Shifted Bengal Capital from Dhaka to Murshidabad ?

25. Who declared Bengal an Independent state after the death of Aurangzeb in 1707 AD ?

28. Who established Afsar Dynasty in Bengal after removing Nasiri Dynasty ?

29. Who became Nawab of Bengal after Shujauddin ?

31. Which River was accepted as the Border of Bengal and Maratha Empire in 1751 AD ?

32. Who Opposed the declaration of Sirajudullah, the successor of Alivardi Khan as Nawab of Bengal ?

33. When did Black Hole Tragedy happened ?

34. As per John Zephania Hallwell, how many people survived out of 146 from Black Hole Tragedy ?

35. Which Treaty was signed between Robert Clive and Sirajudullah ?

36. Which all people were against Sirajudullah in Battle of Plassey ?

37. Who transferred the Capital of Bengal from Murshidabad to Munger ?

38. Who said “The Battle of Buxar completed the unfinished work of plassey” ?

39. Who concluded “Buxar war was more decisive in terms of outcomes than the battle of Plassey” ?

40. Who was the founder of Nasiri Dynasty ?

41. Who was the Last ruler of Nasiri Dynasty ?

42. Which treaty was signed as a result of Battle of Buxar ?

43. Which rulers had fought against the British in Battle of Buxar ?

44. How much Pension Company decided to Pay to Mughal Emperor Shah Alam II as per the treaty of Allahabad ?

45. When was the 2nd Treaty of Allahabad was signed ?

47. Who terminated the Nawabi of Bengal ?

50. When did Shaista Khan(Nawab of Bengal) confiscated Kasim Bazar Factory ?

51. When did Farukkshiar granted Royal Farman, Known as Magnakarta of Company ?

I hope you liked this article on History of British Rule in India. Please let me know your feedback on Comment Box.