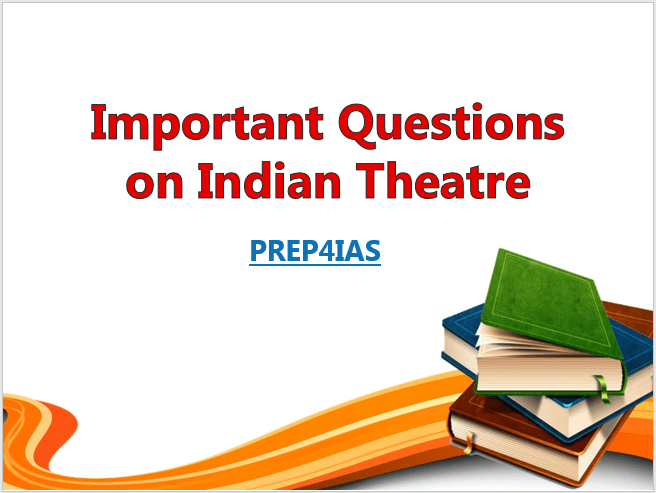 In this article, I will go through 23 Important Questions on Indian Theatre. Folk Music, Drama, Plays were the important part of Indian Theatre and it began as a narrative art form. Classical Sanskrit Theatre has many evidences which suggests the rich tradition of Indian Art and Culture. Later on we see a decline in Classical Sanskrit theatre and onset of Folk Theatre in many parts of the Indian sub-continent. Some of them are still popular and continue to be a part of festivals. Here we will look into all the Important Questions related to Plays, dramas, folk music etc of Indian Theatre which can be asked in your Exams.

1. How many types of plays were there in Ancient India ?

Ans. There were two types of plays in Ancient India:-

2. Who was the first to introduce an antagonist in the play apart from hero and heroine ?

3. How many types of plays were there in classical Sanskrit Tradition ?

4. How many characters were there in Sanskrit Plays ?

Ans. There were basically 3 kinds of characters:-

5. What kind of character Vidusaka plays in Sanskrit Play ?

Ans. Vidusaka plays comic character in the play. Basically he acts like a clown who is noble and good-hearted, often a firend of hero.

6. What is Bhuta Aradhana ?

Ans. It is a practice of worshipping the dead ancestors. This practice is mainly visible in the coastal parts of Karnataka.

7. Which is the chief form of Bhuta worship practiced in Karnataka ?

8. Which deity is involved in Ramman Theatre ?

10. Which Popular Art form of Gujarat uses painted pictures to narrate stories of romance and valour ?

11. How many musical instruments are involved in Chhaiti Ghoda ?

Ans. It is a form of open-air theatre mostly popular in the foothills of Himachal Pradesh. It is mainly staged during village fairs and festivals through the night.

Also Read: Top 11 Famous Economists and their Contributions to the World Economy

13. Which Popular Event depicted in the Play of Powada ?

Ans. It is a play written to laud the heroic deeds of Shivaji when he killed his adversary Afzal Khan.

15. Where did the Yakshagana Theatre Originated ?

Ans. It originated in the Royal Courts of the Vijayanagara Empire.

16. In which part of the region swangs are mostly popular ?

Ans. It is mostly popular in the region of Rajasthan and Haryana.

17. Which theatre is associated with the festival of Manasha in Assam ?

Ans. It is the folk theatre of the region of Malwa in Madhya Pradesh.

19. Who started the famous one-act play Ankia Naat in Assam ?

Ans. It was started by famous Vaishnava Saint Sankaradeva and his disciple Madhavdev in the 15th-16th Century AD. More on Indian Theatre.

21. In which language Koothiyattam is usually performed ?

22. Which is the World’s oldest Amphitheatres ?

23. Who had written Natya Shastra ?

I hope you liked this article on Indian Theatre. Please let me know your feedback on Comment Box.